Stéphane Robin smiled enthusiastically: “You must let us know if you try any of the recipes.” 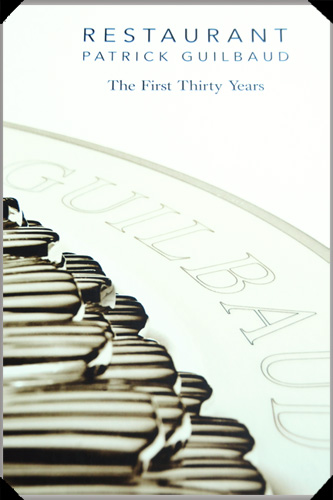 “I’d love to try something from the book,” I had said in reply to Stéphane and – while I meant it, I really did – I also found myself wondering if the book might contain anything recipe-wise that could be classed as easy. Fat chance. Easy is not a term one one should expect to apply to cooking at two Michelin star level, and the 40 or so recipes in this book are the real deal. You won’t find recipes that have been dumbed down for home use but, rather, a genuine attempt to commit to paper instructions for accurately recreating some of the restaurant’s signature dishes. That’s just how Patrick wanted it.

As with the restaurant itself, attention to detail guided the production of this book, and much like the food at Guilbaud’s, the volume is a beauty to behold, in addition to having a rich and colourful story to tell. From the early days of the restaurant, when customers were famously aghast at the lack of salt and pepper on the tables and (worse still) at the fact that potatoes were not served with every meal, through to its establishment as a Dublin institution, the story is also one of changing Irish tastes and expanding Irish palates. It’s well worth acquiring for anyone with space on their coffee tables for a slice of Irish restaurant history, as well as for those who might aspire to reproduce a bit of Michelin-starred magic at home. 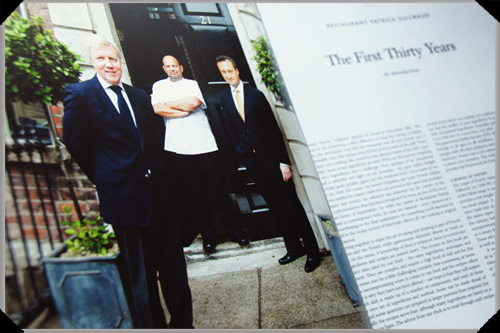 Those keen to get their hands on a copy of the book will find it on sale at, among others, Avoca stores, Brown Thomas, Dubray Books, Fallon & Byrne, as well as at Restaurant Patrick Guilbaud. It retails at €50 and proceeds from the sale of the book go to the Irish Hospice Foundation. 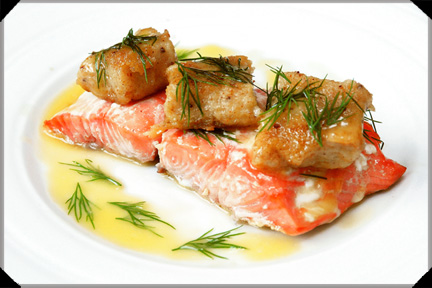 With the intention of making good my expressed desire to recreate a dish from the Guilbaud’s book, I had earmarked a recipe for fillet of salmon with tandoori gnocchi and sorrel sauce on the basis that (a) I rather fancied I could cook a piece of salmon and (b) gnocchi were at least somewhat familiar territory. I soon figured out that my attempted re-creation would be nowhere near exact.

The thing is, of course, that recipes for restaurant use are, by their very nature, different to recipes for home use in terms of quantities, equipment, ingredients and the skills they may expect or assume the reader to have. The biggest case in point in this instance was when I re-read my chosen recipe and finally registered the fact that it called for the fish to be cooked in a water bath – and not, I might add, the kind that I have in my bathroom. Still, I persevered and, though I knew the texture of the fish would be different, I made do with my oven. I wouldn’t be reaching any dizzying Michelin-starred heights this time ’round, that was clear (the presentation alone would need work, not to mind everything else) but I figured I could still learn a lot by trying.

Quantity-wise, this recipe probably produces enough gnocchi to adorn 10 or so Guilbaud-style salmon fillets (as only 3-4 gnocchi are specified per serving). However, you could, I think, always choose to serve up more gnocchi with each plate – I, for one, wouldn’t complain – in which case this probably makes enough for 4 servings.

The other thing to note is that the Guilbaud recipe called for a quantity of tandoori spice, which is, in itself, a spice mix that may have different formulations. I took a stab at making my own tandoori spice though (given that I’ve never had this dish at Guilbaud’s) I can’t really say how it compares to that used in the restaurant. One thing it doesn’t have (and which is common in tandoori formulae) is vibrant red food colouring, but I figured I could live without that.

For the tandoori spice:

As with the gnocchi, I would estimate that the quantity of sauce made by this recipe is enough to dress maybe 10 or so of the Guilbaud salmon fillets (though if you wanted to serve more gnocchi on each plate (as suggested above), you’d probably also allow a little more sauce per serving also).

The Guilbaud’s recipe for this very butter-rich sauce calls for the use Bordier butter, a rather highly regarded French product. Not having such a thing, I used good old Irish butter instead.

The recipe also calls for reducing a quantity of fish stock, though it doesn’t specify by how much, so I hedged my bets and reduced it by around half.