Spud Sunday: The Return Of Foodcamp

The “Food Unconference” the organisers called it.

The event in question, Foodcamp, returned as part of this weekend’s Savour Kilkenny festival, after a very successful inaugural outing last year. The agenda was largely determined by the attendees, each of whom was free to give a presentation, and the guidelines were simple: inform your audience rather than sell to them, and bring something to share for lunch.

Potatophile that I am, I was gutted that the talk on boxty by Stephen Hennessy of The Boxty Bakers was cancelled at the last minute. Still, it did mean that I had the pleasure of hearing William Despard of Dublin’s long established Bretzel Bakery talk about the importance of real bread and – more to the point – of seeing precisely what he thought of the mass-produced white sliced pan eaten by so many, when he gave a few slices of same a good old thwack with a hurley. That, I think, reflected the kind of passion about all things food that this event seems to engender. 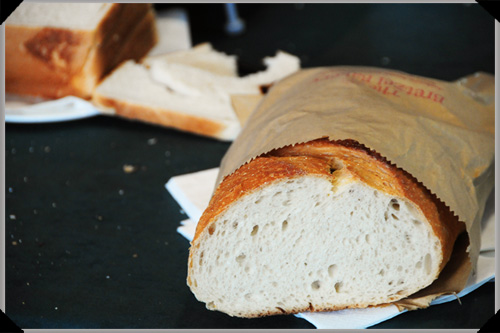 One of the lovely loaves from the Bretzel Bakery and, in the background, some white sliced pan,
the villain of the real bread piece

There was, of course, much else besides. I heard former Green Party TD Mary White, who now runs Blackstairs Eco Trails in South Carlow, talk about foraging and – well before the sun was over anyone’s yardarm – sampled some of her wonderful sloe gin. The tippling trend continued with a spot of beer and cheese tasting to coincide with Bord Bia’s Farmhouse Cheese and Craft Beer weekend. Recently crowned supreme champion at the British Cheese Awards, Helen Finnegan of Knockdrinna, and Claire Dalton of the Dungarvan Brewing Company invited us to sample their wares, with the Knockdrinna Gold washed rind goat’s cheese proving a very good match for the Copper Coast Red Ale. There was yet more beer at lunch, as Caroline of Bibliocook, whose husband Scott is one of the folks behind 8 Degrees Brewing, brought along some of their wonderfully named and fully flavoured Sunburnt Irish Red to help wash down what was a bounteous array of communal eats. 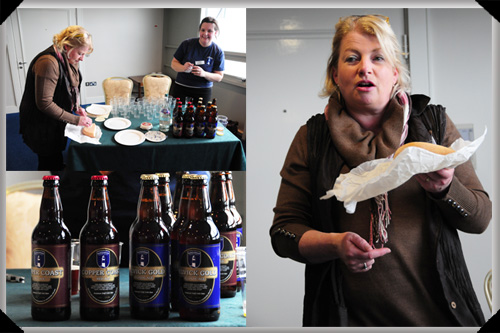 In one of the other sessions I got to, journalist and author Suzanne Campbell discussed the darker side of the food industry and the real price of cheap food – a reminder that, while we have a land and climate that are conducive to the production of excellent food, conditions in the retail environment often work against that, particularly when it comes to the enormous power wielded by supermarkets. Interestingly enough, the subject of whether the Irish Food Bloggers Association should actively seek to encourage writing on food issues was one of the questions posed when, one year after it came into being, founders Caroline and Kristin convened bloggers to talk about where next for the association. The consensus, however, was that the IFBA should remain as a conduit for information rather than setting any agendas, while talk of an Irish food blogger conference for 2012 seemed a popular idea with those present. 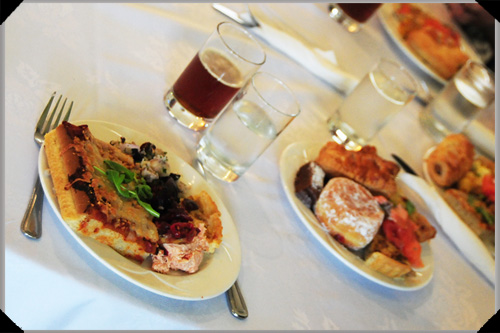 Foodcamp lunch: returning for second and third helpings was the order of the day

Finally, the event closed with a spirited debate on the topic “Traditional Irish Cuisine – an embarrassment of riches or just an embarrassment?”, chaired by John McKenna of the Bridgestone Guides.

Though there were speakers who were nominally either for or against the motion, one of the first points that American food writer Colman Andrews made was that, in all likelihood, everyone present was probably of the same opinion: we are richly endowed when it comes to the quality of ingredients that we can produce in this country, but that hasn’t prevented an often miserable failure to realise what it is that we’ve got and how to make best use of it. In a simple but telling case in point, Seamus Sheridan of Sheridan’s Cheesemongers pointed to the embarrassment of seeing apple trees outside, with their crop left to fall and rot, while inside, chefs were probably serving bought-in apple desserts.

There may also be a lot of truth in the fact, as pointed out by food historian Regina Sexton, that Ireland has long been in the business of producing food for other European tables, and that we did not consider what we retained for ourselves to be particularly remarkable (with the exception, I might add, of the dewy-eyed appreciation by many’s the Irish person of a steaming hot, floury spud).

In the end, Catherine Cleary, restaurant critic with the Irish Times, probably put it best when she said that there is a richness in Irish food, but a poverty in our thinking about it. Foodcamp, and events like it, do much to weave that poor straw into a golden, celebratory thread. Long may it continue.