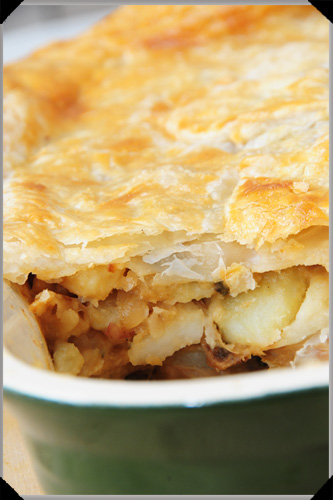 Having looked through the Pieminister book [1], it was almost inevitable that I would choose to make their cheese and potato pie. A simple recipe, with lots of sliced potato, flavoursome cheese, mushrooms and cream all under a puff pastry hood. In other words, there was a lot to like, in both potato and pie terms, so I got to it.

Shockingly for me, though, I found that the amount of potato in the original recipe was too much relative to the rest of the ingredients. The mixture lacked moisture and turned out to be quite a dry pie, so in my adaptation below, I have reduced the quantity of potato by a third and added more liquid. And though the original recipe recommended floury potatoes, really, I would suggest that waxy potatoes, which are not as dry and which retain their shape and bite, are better for this.

I have also reduced the amount of pastry, as I only needed around half of the original quantity specified. I added thyme, rosemary and some extra parsley simply because I felt like it, used onion instead of shallots because that’s what I had to hand and used some dried porcini mushrooms because they were lying about in the cupboard. If you don’t have dried mushrooms, you can simply use some extra fresh mushrooms and substitute vegetable stock or water for the mushroom soaking liquid. For the cheese part, there are lots of great Irish cheeses [2] to choose from and I went with a good vintage cheddar for this. I’ve also modified the steps a little to something that made a bit more sense to me having worked through the recipe – one which, truth be told, needed a bit of work to make it work but worked out in the end.