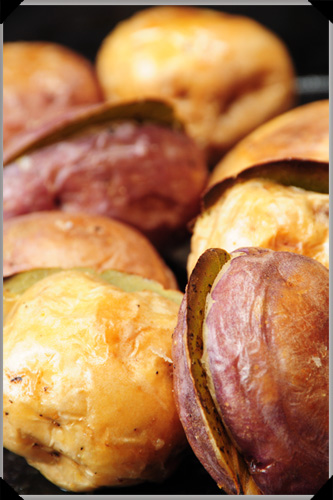 Simple as they come:
potatoes roasted with a bit of inner bay leaf

I was struck lately by the seemingly relentless drive to label the recipes found in many cookbooks and (their often accompanying) cookery programmes as “simple” and “fast” – from Nigel Slater’s Simple Suppers and Simple Cooking to Jamie Oliver’s 30 Minute Meals, and a whole host of others in between. They all, in one way or another, address the perception that, as a race, we 21st century consumers have less and less time to cook and less and less of the kitchen skills required but, ironically, more and more time to watch cookery on TV.

Don’t get me wrong – I’m all for simple and fast, and I have been known to watch my fair share of television cookery – but if, perhaps, there were more books and programmes that stepped back from recipes and concentrated on teaching skills and techniques, that might actually make things simpler and faster for us in the long run. 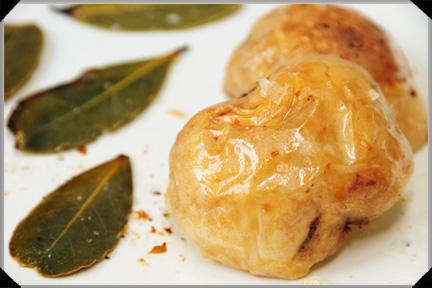 If simple’s what you want, then simple is what you’ll get with these spuds.

A couple of weeks back, I received a tweet from my good fried Jenni about “a tater thing” she’d made – namely a potato baked with bay leaf. It was, she declared, really, really good, an endorsement which placed it firmly on my must-make list. It also reminded me of a recipe in Eveleen Coyle’s Irish Potato Cookbook for roast potatoes with bay leaves which I’d been meaning to try. So finally, today, I did just that.

What you see below is Eveleen’s recipe, more or less, but the essence of it – and the technique that you need to remember – is that you cut a slit in a potato, insert a bay leaf and then roast or bake it, just as Jenni did. Simple, yes, and really, really good.