Let me begin by saying that the idea of a cruise ship holiday has never, as it were, floated my boat.

When I travel, I like to get out and explore. The prospect of being confined to a ship, however well-appointed, and with only an afternoon here and there spent in port, along with hundreds, or even thousands of fellow passengers, has never filled me with joy.

That doesn’t mean that I’m not curious about cruise ships, though. When I was invited to take a tour of the Azamara Journey in Dublin Port recently, and to sample their food service, I did (in the name of research, you understand) go along. 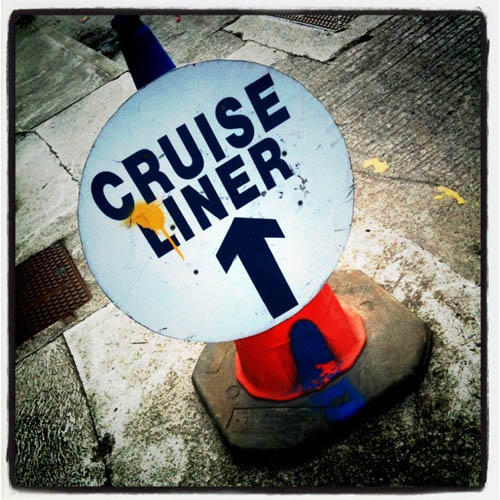 To be fair, the cruise liner in question was a lot swisher than this sign in Dublin Port
might have suggested

The visit on board ship kicked off with a presentation from the President and CEO of Azamara Club Cruises, Larry Pimentel, a man with many years of experience in the cruise business. He spoke about their boutique cruise philosophy:

– They use smaller ships than is typical in the cruise world (where small is a relative term – the Azamara Journey berths around 700 passengers; most others in commercial operation accommodate several times that number).

– Using smaller ships means that, among other things, they can offer a greater range of destination ports.

– They also offer more overnight and longer stays in port, as well as tie-ins with local events, from the Chelsea Flower Show to the Carnival in Rio de Janeiro.

All of which made it sound like the type of cruise I might actually consider, if I were choosing to cruise at all, that is. 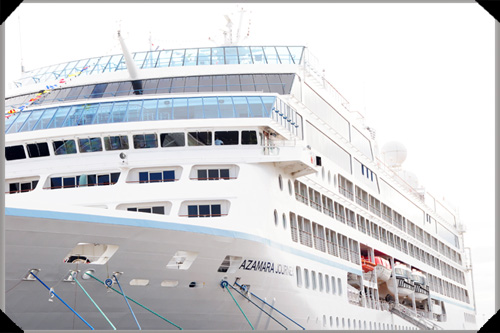 The Azamara Journey: up close, it's hard to believe that, in cruise ship terms, this is kinda small

Larry also came across as being exceedingly proud of the crew who staff his ships – “there may be better ships, but no better crew,” says he. I was only there for a short visit but, to judge by the attentiveness of the crew, I couldn’t disagree. As Larry spoke, they took particular care with the filling of champagne glasses and proffered a steady supply of exceedingly lovely canapés – among them, smoked salmon with capers, tempura prawns, scrambled egg with caviar, prawn toasts, fig with prosciutto and ratatouille in filo pastry cups.

Truth be told, though several courses of lunch were to follow, I think I liked those opening bites more. Nevertheless, I did consider the possibility of stowing away so that I might have another crack at the lunchtime starter, which featured the always lovely combination of crab, grapefruit and avocado. And if I were to stump up the cash to become a bona fide passenger, I could see that, between the main dining room, the two speciality restaurants (serving mediterranean and steakhouse style dishes), the casual dining Windows Café or even room (or, rather, cabin) service, I could, in all likelihood, expect to eat rather well.

Seems I was starting to like at least some aspects of this cruising business after all. 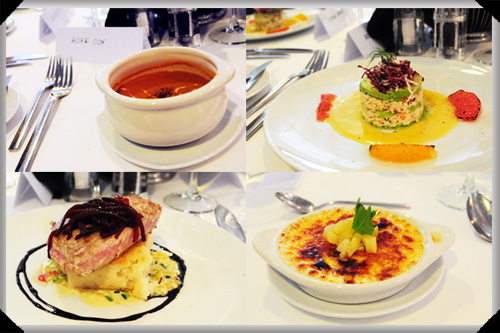 After lunch, we took a tour around the ship. Much as I expected, the ship had all of the facilities you might expect to find in what is, after all, an upmarket floating hotel. In particular, I was glad to see that there was a gym on board – with the equivalent of four course dining available every night, I think I’d need it. 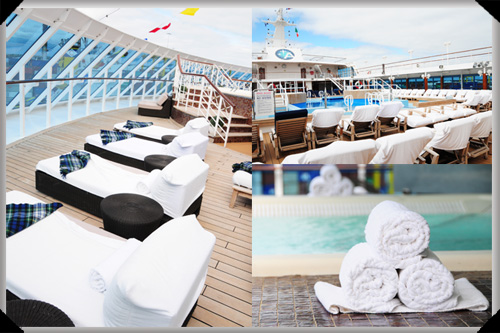 Out and about on deck 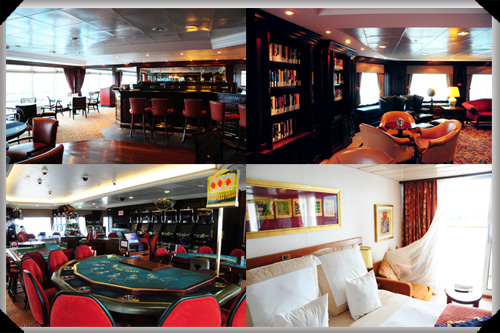 View from the inside:
top: one of the many bar and dining areas (left) and the library (right)
bottom: the casino, if gambling is your thing (left) and an outside cabin to rest your head at night (right)

At the end of it all, and not having actually sailed an inch, I got ready to disembark. While waiting to say my goodbyes, I chatted about the tour with another visitor to the ship. “You really need to see this in the Mediterranean,” she said, “when the outdoor decks come into their own.” I pondered that as I looked beyond the ship towards the overcast, industrial landscape of Dublin Port. She was right, of course, and while I still wasn’t sure that the cruising life was for me, in my head I had already set sail for more southerly, sunnier climes.

Unsurprisingly, Azamara Journey and its sister ship, Azamara Quest, do, in global travelling terms, get around. For those fond of numbers, their 2012 schedule includes 64 sailings to 181 destinations in 57 countries throughout the Mediterranean, Northern Europe, the Caribbean, South America, India and East Asia. The fares depend on destination, duration and your chosen cabin type and aren’t necessarily cheap, but I guess you expected that. You can get the low-down on exactly where they go and what you can expect to pay at www.azamaraclubcruises.ie or call 1800 932 619 or your travel agent. Travel professionals, meanwhile, should visit www.cruisingpower.ie.

My visit on the ship coincided with the first sailing to depart from Dublin Port, selected as one of Larry Pimintel’s ‘President’s Cruises’ for 2011. If you fancy joining one of the President’s Cruise voyages for 2012 and you’ve got some spare cash, you can join Larry in March 2012 for a 17-Night Indonesia and Philippines voyage onboard Azamara Quest from €3,571 per person (based on two people sharing an inside cabin). Or, €1,695 per person gets you on the 10-Night Red Sea voyage on Azamara Journey, departing November 2012. The fares do include meals, room service, speciality coffees, teas and bottled water, house wines with meals and entertainment programmes plus all relevant cruise taxes/fees.