So, what exactly does one do with a load of Turkish pepper?

I’ve been wondering about that for past few weeks, ever since my brother, who’d been travelling in the Turkish neck of the woods, brought me a collection of randomly chosen local spices, most of which turned out to be pepper of some kind. There were small, maroon-coloured chilli flakes called isot biber or urfa biber (and not one, but two packets thereof), bright red chilli flakes labelled pul kirmizi biber, and karabiber, which I took to be ground white pepper but which I now suspect is more black peppery. 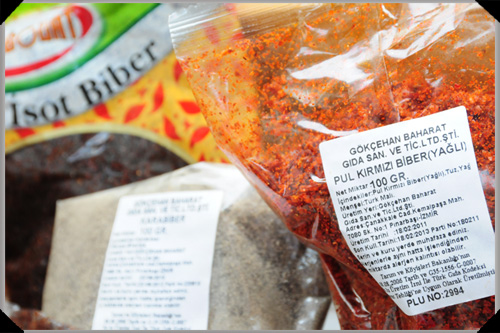 Whatever the nature of the individual peppers, though, the key point was that I now had rather a large quantity of them languishing in my cupboards. They might have continued that way for some time if not for the spotting, last week, of a potato recipe in the Guardian from Yotam Ottolenghi which called for Turkish chilli flakes or pul biber. Described in the piece as a classic Lebanese and Syrian take on roast potatoes, the recipe for batata harra had my name, and (I hoped) my pepper, written all over it. 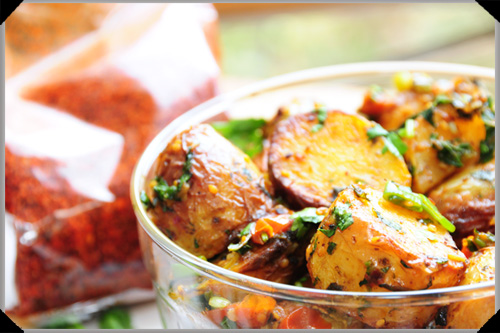 The recipe below is an adaptation of Yotam Ottolenghi’s aforementioned formula for batata harra. The original calls for sweet red peppers to be roasted with the potatoes, whilst I have used cherry tomatoes instead – mostly because they were growing right outside my kitchen window. Also, while the recipe features the classic Lebanese trinity of lemon, garlic and olive oil, I’ve included a few other Middle Eastern regulars, in the shape of mint and sesame seeds, along with a helping of spring onions.

The other thing to say, of course, is that you don’t have to use Turkish chilli flakes in this recipe – you can always use other chilli flakes which will bring their own particular heat and flavour. The pul kirmizi biber which I used was like a hot paprika, but Syrian aleppo pepper, for example, would be fruitier and milder. Remember also that chilli flakes will vary in strength, as do people’s tolerances for heat, so adjust according to your taste and the chilli you’re using.