Spud Sunday: The Day Of The Spud 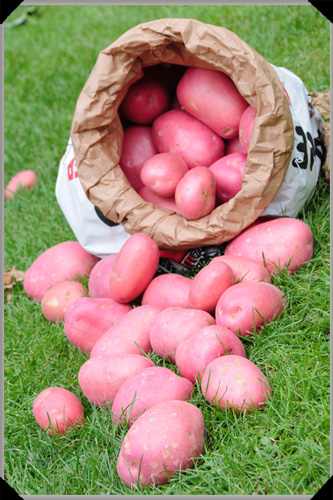 National Potato Day: Spuds finally get their day in the sun

By the time it got to Thursday, there was a definite buzz developing around the whole National Potato Day thing.

A simple idea, the brainchild of North Dublin family growers Keogh’s Potatoes, it was prompted by the continuing slide, in recent years, in the sales of fresh potatoes in this country. According to Tom Keogh, those sales have fallen by up to half since 2002 – a shocking statistic, I know.

Still, though we may not be buying them as much as we used to, the concept of National Potato Day connected with the corner of our psyche that acknowledges spuds as part and parcel of the Irish condition. The idea gathered quite a bit of momentum in the run up to the day itself, with coverage both in the national press and on national radio. Over on Newstalk, radio host George Hook revealed himself to be an ardent spud fan and can be seen below leading the charge for what he later called “one of the great foods” (and no, I couldn’t exactly disagree with him on that one).

Meanwhile, over on Twitter, the great and the good were pondering how to mark the occasion.

And, of course, folks were wondering about my own Chief Spud Ambassadorship…

In the end, there was neither sash nor baton, but I did score an ‘I love spuds’ t-shirt, just like the ones sported by the potato sack racers below, along with as many chips as I could eat (which, it must be said, is quite a lot). 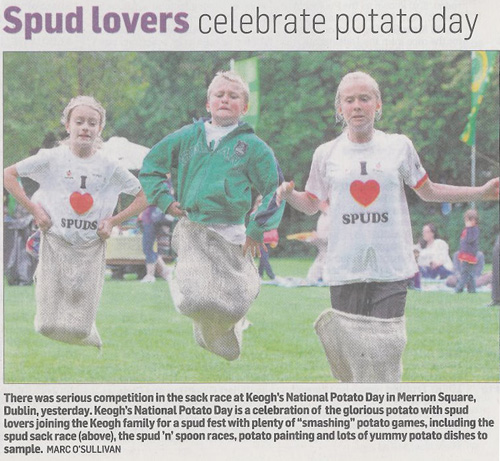 As seen in the Irish Independent on Friday 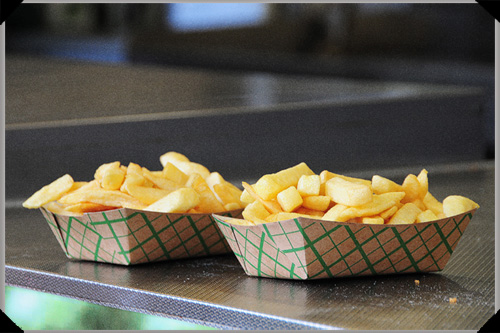 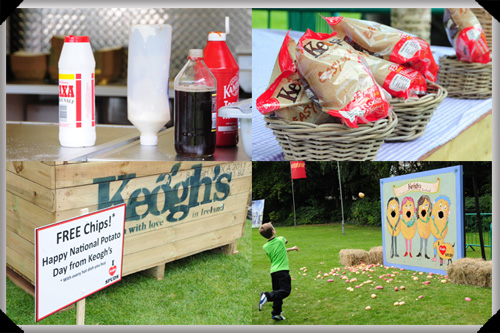 Free chips, free spuds and an assortment of potato-themed games:
wasn't entirely sure I approved of the potato throwing event, but the kids seemed to enjoy it no end

And what, you might wonder, did I really make of it all?

To re-purpose a much derided election slogan, there’s “a lot done, more to do”. The National Potato Day that we saw this week showed that the Irish affection for the spud persists, but…

…will we buy and eat more spuds as a result?

Perhaps some of us will – and perhaps it will take products like Keogh’s Easy Cook steam-in-the-bag potatoes to convince the convenience food generation to give real spuds another try. Regardless, we need to keep getting the message out about the wonders of the versatile potato every other day of the year too. And when National Potato Day rolls around again next year, as it inevitably will, please let’s put more than just chips on the menu.

While we’re on the subject…

If you listened to George Hook’s little rant above, you’ll gather that he reckons we don’t know how to cook potatoes anymore.

Well, if that’s the case (and for some, it likely is) I guess he could send people my way or perhaps send them to Donnybrook Fair which, I was interested to discover, is holding a half-day potato cookery course on September 12th. The course promises to “unlock the mysteries surrounding the wide variety of potatoes available” so, if potatoes are a thing of mystery to you, then you’d best be getting yourself along there.