No, despite my near addiction to all things dairy, I am not actually referring to the amount of cheese that I am likely to consume in a single sitting. What that weighty amount of dairy goodness does represent is the amount of cheese thrown out by the average American over the course of a year, according to an article in the July, 2011 issue of National Geographic, entitled How to Feed A Growing Planet. That article, in turn, inspired my friend Jenni to start the Four Pounds of Cheese project – an experiment where participants would document, for a week, just what it was they were wasting, food-wise. Having been brought up to the tune of my mother’s “waste not, want not” mantra, I am programmed to abhor waste. That doesn’t mean that I’m not capable of wasting food with the best of them. It does, however, mean that I’ll feel dreadfully guilty when I do. Needless, to remark, I was keen to join in.

Last Monday, the week of waste watching began and it didn’t get off to a great start.

I ate out for lunch and the salmon I ordered was served in the classic Irish manner, meaning it came with two kinds of potato (mashed and roasted, in this case). Despite a valiant effort, I didn’t manage to clear my plate, so, to my shame, the very first thing I managed to waste were some of those selfsame spuds. And then I did what I suspect many of us do: I ordered dessert anyway. Different compartment, right? Surprise, surprise, I couldn’t finish that either. Sheesh. Waste 1, Spud 0. 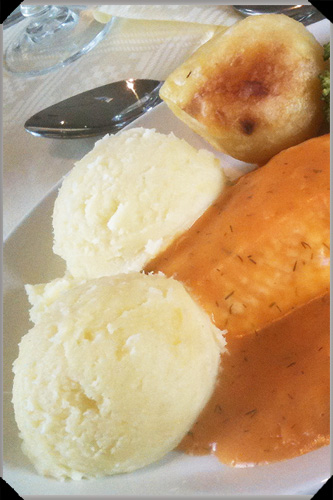 Too many potatoes, even for me

Tuesday, for a while, looked like it might go the same way. In a clear case of trying to do too many things at once, I managed to burn what would otherwise have been a perfectly good batch of biscotti. After much cursing, followed by a bout of mature consideration, I decided that, though not my best work, they were still ok to eat. Waste 0, Spud 1.

My batting average for the rest of the week did improve greatly, but only because the exercise forced me to do more forward planning in terms of my food purchases, especially anything perishable. I am often guilty of buying the equivalent of my own bodyweight in fruit and vegetables, some of which are inevitably past their best before they get used, if they get used at all.

I also thought twice about other items that might more usually get thrown down the sink, so I found myself using milk that had soured to make scones, saving vegetable cooking liquid for stock and freezing the undrunk remains of a bottle of red to use for sauces. I also took to exploring the far reaches of my cupboards to see what might lurk therein. Thank goodness for the long shelf life of dried beans and pulses, because several not-quite-empty bags of lentils made for large batch of dinner-time dal.

All in all, then, not a great deal went to waste over the course of the week, so bully for me. I am, however, acutely aware of the fact that I’ll have wasted my time if I don’t try to keep it up. 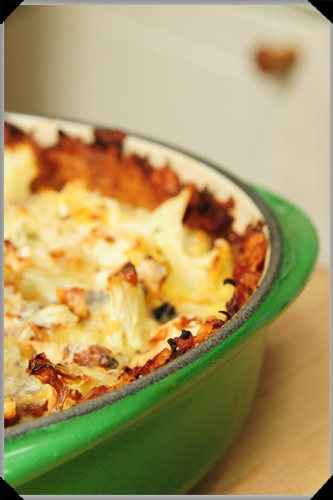 Don’t panic, this recipe does not contain four pounds of cheese – four ounces, more like – but I wanted to include it, as it’s really a template for a pie to which you could add whatever cheese and vegetables you have on hand.

It’s based on a recipe I found in Eveleen Coyle’s Irish Potato Cookbook and it was the potato crust that caught my eye. No pastry here, but a crust composed of grated potato, grated onion and egg – an excellent gluten-free alternative for any savoury pie.

I have jazzed the original recipe up by roasting the cauliflower and adding gorgonzola and walnuts, though vary it with whatever vegetables and cheese you have around.