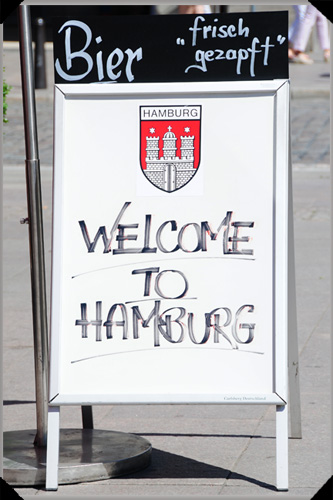 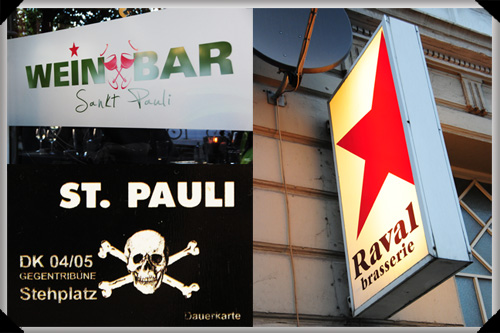 Knowing my potato obsession, labskaus was one of the first things that our friends helpfully mentioned on the flight out. A local speciality of mashed potato mixed with corned beef and beetroot, topped with fried eggs and served with rollmop herrings and pickles, we had also received fair warning from the Hamburg natives: it looks disgusting. No matter about that, though. It was too intriguing not to seek out. 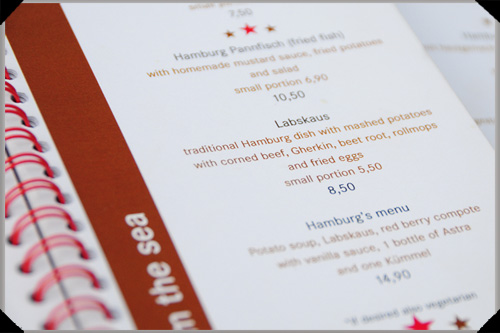 Labskaus on the menu
(and yes, potatoes, in general, are a definite feature of traditional Hamburg fare)

Labskaus, we learned, is the kind of unfancy, stick-to-your-ribs food that dock workers in this major German port city would have eaten in times gone by. While you might not expect to find labskaus on too many modern menus, Raval Brasserie in St. Pauli, which specialises in local Hamburg dishes, had labskaus and more. 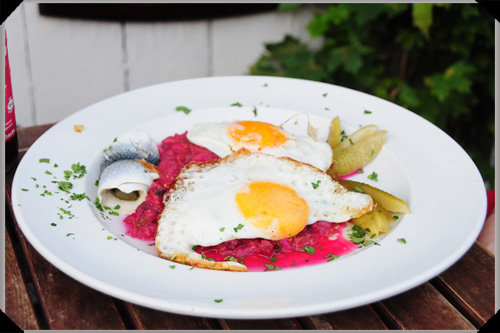 Labskaus at Raval Brasserie in St. Pauli: it's colourful, that's for sure

When it arrived at the table, my sister surveyed her labskaus, if not with suspicion, then with a certain degree of trepidation. Still, she was gamely eating it, though was heard to say “I’m not exactly savouring this” or words to that effect. She continued, “You know you could actually make something nice with these ingredients…”, lending weight to the theory that labskaus may simply be something you need to have grown up with to love. I fared much better with my choice of fried fish and potatoes with mustard sauce, and a dessert of stewed cherries with vanilla custard was entirely simple and lovely. 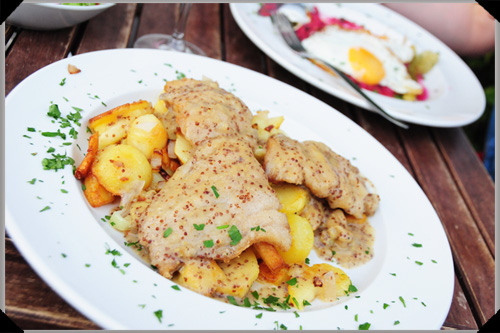 Fried fish with fried potatoes and onions and a mustard sauce

Spudly curiosity satisfied, I enjoyed the rest of a wonderful weekend in Hamburg and returned home. As time went on, though, I found myself becoming more than a little inquisitive about what certain other well-known visitors to that city would have made of labskaus. Turns out there was more of a connection than I might have at first imagined. 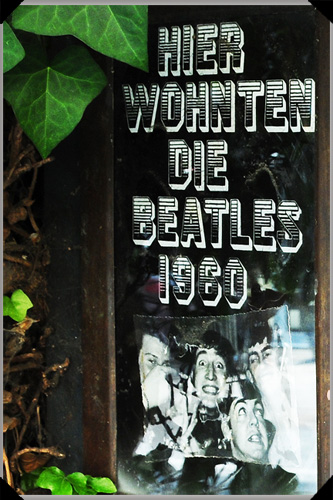 So, did those famous one-time residents of Hamburg, The Beatles, find anything just a little bit familiar about labskaus when they lived in St. Pauli, I wonder?

Larry Zuckerman’s fascinating book The Potato: How the Humble Spud Rescued the Western World notes that one of the earliest savoury potato recipes to emerge from England was lobscouse. The name rings a bell, no? It’s reported to have derived from lapskaus, a Norwegian word for stew, whilst the German labkaus has the same etymological origin.

Lobscouse dates from around 1700 and is reported by Zuckerman to have consisted of potatoes, meat, onions, and “strong seasonings”. It was eaten with hardtack and was popular as sailor’s fare in the ports of Lancashire, of which that future home town of The Beatles, Liverpool, was the largest. By the 1880s, lobscouser had become a nickname for sailor and ‘Scouse’ and ‘Scouser’ eventually came into common English usage to describe the Liverpool accent and a resident of Liverpool, respectively.

In contrast to labskaus, traditional Liverpool lobscouse (or simply ‘scouse) is more of a potato stew. Still a popular dish in Liverpool, it is reported here to have consisted traditionally of a cheap cut of lamb cooked with onions, carrots, water or stock and as many potatoes as possible. Interestingly, it is often served with preserved beetroot and, in some parts, as with its cousin, labskaus, corned beef is the preferred choice of meat. The Hamburg dish may, therefore, not have been entirely alien to the visiting Liverpool lads, though, if they ever wrote about it, those songs have, alas, been lost.