I’ll admit that what you will see below was more carefully assembled (to say nothing of being more psychedelic) than my lunchbox usually is, but, in the bento scheme of things, I’m not sure that it counts as being especially kawaii. (If, at this point, you are sporting a blank or quizzical stare, then I should explain that bento refers to a packed meal common in Japanese cuisine and kawaii to the cuteness thereof – and some bentos are, indeed, tremendously cute).

The call to create a bento began (as many things do these days) as a series of exchanges on Twitter, resulting in an invitation from Chef Pandita to take up the bento challenge – a mission that has been variously tagged on Twitter as #bentomadness, #bentocuteness, #badassbento and (my own particular favourite) #halfassbento. 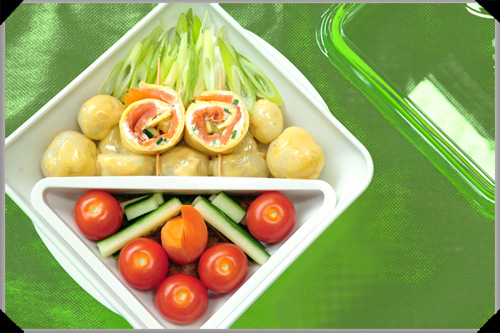 And while I will say that my efforts to fashion a face out of my food might indeed have been a bit half-assed (I mean, did you even guess that it was a face?), the assembled items, nonetheless, made for a satisfying and seasonal summer lunch (and that, surely, counts as a bento win).

Proudly making up the face in the top half of the box were the first of my newly harvested potatoes (woohoo!) tossed in homemade garlic mayonnaise, with spring onion slices for hair and two egg and smoked salmon rolls for eyes. Below, a triangle of toasted brown soda bread, topped with a cherry tomato smile (yes, I know, work with me on this), a carrot nose (no, I don’t actually know anyone who has a nose that looks even vaguely like that) and an anatomically misplaced cucumber moustache. It was, truly, a face made for eating, so that is precisely what I did. 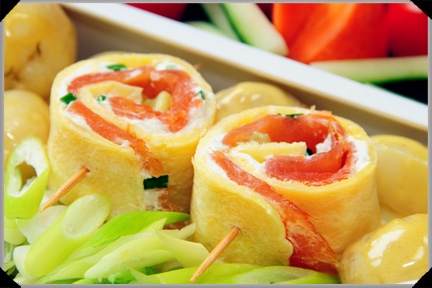 These simple rolls were a vague nod to the Japanese origins of bento and the sushi rolls you might find in a Japanese bento box, though the fish used here is the much more Irish choice of smoked salmon. The recipe below, using a single egg, will make about 4 rolls, which will do one or two people, depending on how much else you’re having for lunch. You can easily double the amounts (or more) depending on how many you want to serve.