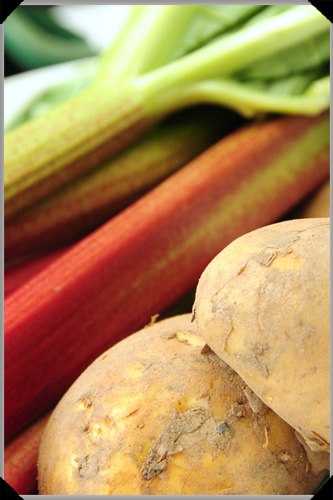 Getting it together: rhubarb and potatoes

Both commonly grown in Irish gardens but it would, to say the least of it, be a rare occurrence to find them cosying up together on an Irish dinner plate. Even though rhubarb is, technically, a vegetable, we’re far more likely to consign it to dessert, where copious amounts of sugar soften its natural sharpness.

But y’know what? If spuds can be used in desserts, then why not rhubarb for dinner? Certainly, if you read Mary Prior’s delightful book, Rhubarbaria, you won’t be left short of ideas for unusual rhubarb dishes, both savoury and sweet.

Under the heading of rhubarb as a vegetable, she includes a Polish recipe for rhubarb and potatoes, taken from Uniwersalna Ksiazka Kucharska, a classic domestic handbook by Maria Ochorowicz-Monatowa, first published in 1910. Reading the recipe, I was hard pressed to imagine what it would be like, consisting of rhubarb cooked in a mushroom and onion broth, which was then thickened and added to boiled new potatoes. For a start, there was no sugar anywhere, and I couldn’t recall having ever tried a rhubarb recipe – even a savoury one – that didn’t involve adding at least a little sweetness.

Still, nothing else for it but to try it out and, while I can safely say that the dish would never score highly in the looks department, I actually liked the end result. In fact, I liked it a lot. So much so that I thought I should share it with you, but not before dressing it up just a little. 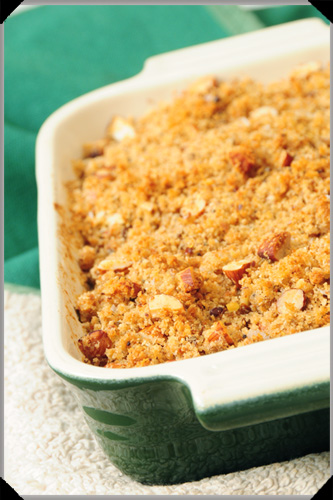 Introducing the rhubarb and potato gratin

This is adapted from the original Polish recipe for rhubarb and potatoes in two important ways: one is the addition of the breadcrumb topping which, frankly, just makes it an altogether more pleasant looking dish to serve up; the other is that I have reduced the amount of rhubarb by half.

The resulting dish has (to my mind) a pleasant tang, as opposed to a more pronounced tartness (though you can experiment with adding more rhubarb if you like). Also, where the original recipe called for dried mushrooms, I have used dried porcini, which give a nice depth of flavour, though you can try this out with whatever dried mushrooms you can get.

You’re also probably wondering (as was I when I tried the original recipe) about what exactly you would eat this with. While you could certainly scoff a portion of this on its own, I think pork, and particularly pork sausages, would make a very good accompaniment. 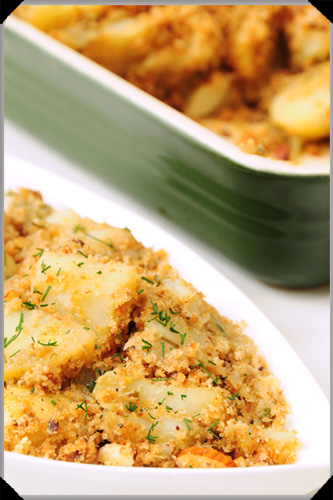 For the rest of the sauce: