I suppose it’s no real surprise that my inbox has, over the past couple of years, become a magnet for what can sometimes seem like the most random of spud-related pictures, recipes, links, articles, poems, songs, videos and requests.

A recent email from Jeremy Fordham offering to write a post on the subject of the potato battery did, however, catch my eye. While it’s a distinctly non-food use of the spud, it seemed to me that it still had a place in the pages of this blog. Jeremy, an engineer and contributing writer for onlinephdprograms.com, is an advocate, among other things, of renewable energy. Judging by his post below, he’s all for spud power too.

There are hot potatoes, french fried potatoes, baked potatoes and scalloped potatoes. There are potato chips, potato pies and potato soufflés. Last, but not least, there’s the potato battery. Who on earth invented the electric spud? Why does it work? For that matter, why would anyone want to see if a potato could conduct electricity in the first place? Well, we may never be able to answer some of the questions this quirky experiment raises, but a brief overview of the possible origins, quirky chemical compositions and remarkable staying power of the grin-inducing oddity that is the potato battery is sure to be worthwhile. 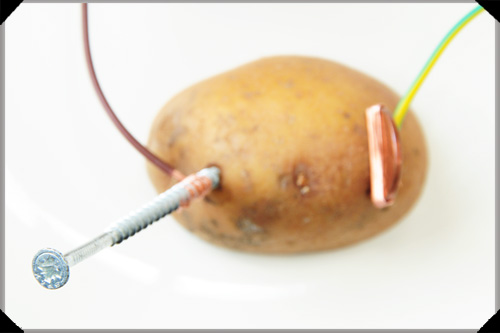 The potato battery: not your usual sunday spud...

While the Internet is littered with stories detailing potato batteries, it seems as though one must have a PhD to learn the true story behind this invention, as the origins of the potato battery remain uncertain. One site mentions that potatoes were known to conduct electricity as early as the 18th century, but even this is suspect. What we do know for certain is that as early as the year 1600, electricity was beginning to be understood. As the Galileo Project points out, it was in this year that William Gilbert published what was the first treatise on electricity and magnetism and saved sailors a lot of worry about why their compasses worked when he identified the difference between magnetism and electricity. Who knew that people once thought a compass would be ruined if you ate garlic near it! At least Gilbert ensured that 17th century sailors could enjoy their spaghetti bolognese and garlic bread in peace.

Fast-forward to 1729 when, according to Encyclopedia Britannica, another scientifically-minded Englishman, Stephen Gray, discovered that electricity could flow. Before he decided to moisten corks in glass tubes and rub the tubes together, our understanding of electricity was limited to rubbing our feet on the carpet and getting a shock. What Gray actually accomplished was proving that electricity could be conducted between two points. Since corks are a starch, you could say that Gray was the brainchild behind the original potato battery. 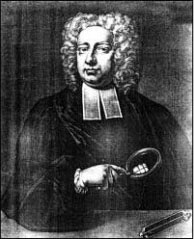 The California Energy Commission mentions that the potato battery at its most basic got one more helping hand when, in 1800, Alessandro Volta, from whose name the term “volt” comes, invented the voltaic pile—which is really just a fancy way of saying he invented the battery. Now, Volta’s battery didn’t have any spud-based components, it was just copper and zinc separated by cardboard and linked with a copper wire, but it did pave the way for one that did: the Columbia dry cell battery.

The Columbia dry cell battery doesn’t have much in common with the potato battery of science experiment fame, but it does have one component that any dedicated aficionado of spud science would be happy to know about. It had a separator coated in flour and, wait for it, a potato that was inserted into the zinc can to improve ion diffusion (also known as electrical flow). All of this leads us to that stalwart of the classroom, that standby of the science lab—the potato battery.

How You Make it 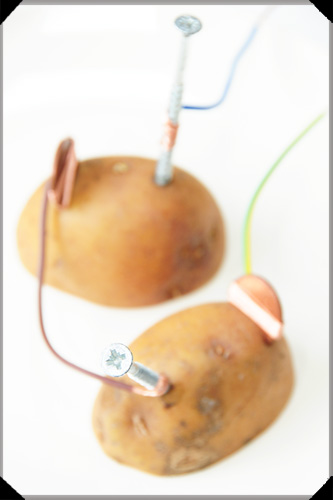 The potato battery is simple enough to craft, using a potato, some insulated copper wire, a galvanized nail and a penny coin. According to PBS Kids, all you need to do is simply cut a potato in half. Then wrap a piece of insulated copper wire around a galvanized nail on one end. Wrap another piece around a penny. Stick both in one half of the potato, and make sure they are not touching. Wrap a third piece of copper wire around another penny and put it in the other half of the potato. Add a galvanized nail to this half, minus the copper wire. Then, connect the wire from the first half’s penny to the nail in the second half. Touch the free ends to a digital clock with wire connectors (although a light bulb will also work) and see if it lights up. If it doesn’t rearrange how you’re connecting the wires to the clock, light bulb, etc. Voilà, instant electricity. Granted, it only produces about two volts, maximum, but it works.

Without getting too technical, electricity is the result of a chemical reaction. As a Berkeley teacher’s guide to this experiment demonstrates, the penny is copper, while the galvanized nail is coated in zinc. When zinc, which is negatively charged, comes into contact with an acid, electrons are freed in a chemical reaction. Copper, which is positively charged, accepts those electrons, thereby creating an electric circuit.

What is the acid that makes this little miracle of potato power? It’s the mild phosphoric acid H3PO4, which occurs naturally in potatoes and other starches. Just this acid is enough to cause the release of electrons and their acceptance on the other end of the circuit. Those electrons are the electric flow, an atomic phenomenon that is measurable on your kitchen table.

While two volts of electricity isn’t enough to even light a room, the potato battery does show promise. According to Business Wire, Yissum Research Development Company Ltd. has made a spud science breakthrough. It’s hard to believe, but until 2010 no one, apparently, had tried boiling the potato before sticking it full of copper and zinc. Turns out, if you boil the potato, its electrical capacity increases tenfold, making it five to 50 times cheaper than a standard 1.5-Volt D battery and six times cheaper than a standard kerosene lamp used in the developing world. As such, it turns out the favorite science experiment of chemistry teachers everywhere could be used as a source of clean power in developing countries.

The potato battery experiment might seem old-fashioned in today’s gadget-minded world, but it’s solid science with a quirky past and a surprising future. While it’s still difficult to imagine that no one thought to boil a potato before making a battery out of it, you have to wonder who decided to see if a potato could be made into a battery in the first place. Nonetheless, we can be glad he or she did!