In fact, I could get all biblical about it and accuse Nidal Rayess of having saved the best jam ’til last, but the truth is I am just thankful for what I can honestly say was a higher jam experience.

We visited Nidal’s dairy in Jdita a couple of weeks ago, as part of the Taste Lebanon tour, where, among other things, they make labneh (or strained yoghurt) and halloumi cheese from their own cow’s and goat’s milk, as well as making a range of preserves. 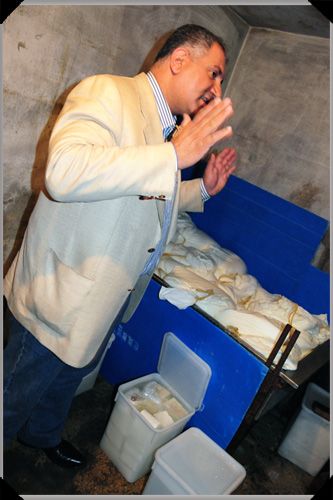 Nidal Rayess: one man and his cheese

As we toured the small dairy and watched a batch of halloumi in the making, we learned that Nidal’s grandfather was the first person to make this particular kind of cheese in Lebanon, having learned the process during World War 1. They still make it here using traditional methods, while a ricotta-like cheese is made from the whey that’s left over. 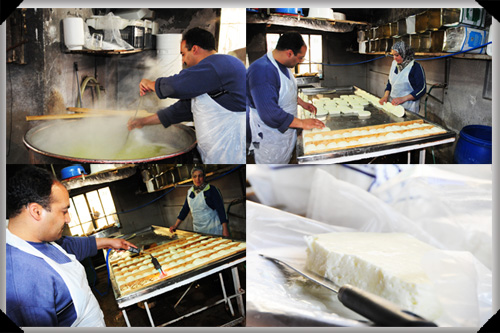 There were many satisfied nods of approval as we proceeded to sample a range of their dairy goodies. In a country that loves its labneh, this was some of the best we had tasted, and the fresh halloumi had us returning for seconds, thirds and more. It didn’t come as a great surprise to hear that products from this dairy feature on the royal Jordanian family’s shopping list. If I lived anywhere even remotely nearby, I’d be filling my basket too. 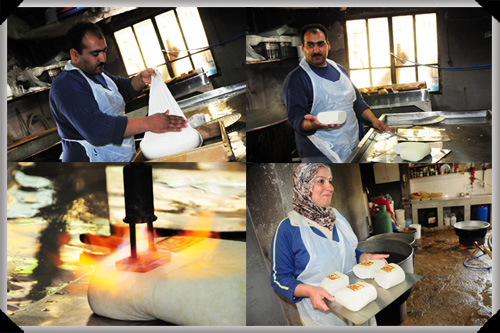 Making and branding the blocks of pressed ricotta-like cheese

However, it was only after our mini dairy feast that Nidal produced, first, a jar of mulberry jam, and then a jar of apricot. The mulberry was magnificent, but the apricot, with its glorious perfume of sun-ripened fruit, and always my most favourite of jams, was perfection.

When I was growing up, the jar of apricot jam that resided in the larder was not what we kids got on our toast, but was reserved by my mother for almond slices or sponge cake fillings. It was right up there with Rose’s lime marmalade as a rare and lovely treat. If there was ever an occasion for a jam-induced swoon, this apricot jam of Nidal’s was it.

I was still in a state of jam nirvana when Nidal said “I’ll tell you the secret.” That, needless to remark, focused everyone’s attention. I mean, who wouldn’t want to know how this jar of sunshine had come to be?

And the secret to the jam wasn’t a sprinkling of fairy dust (which I would have believed), but a level of effort, care and attention that was humbling. The fruit in the jam was clearly exceptional, but what made it even more so was that it was only the half of each apricot that had faced outward towards the sun that was used in its making.

Few people, I imagined, would go to such trouble for their preserves. I am just glad that somebody in the world does, and that I have a jar of such jam to prove it. 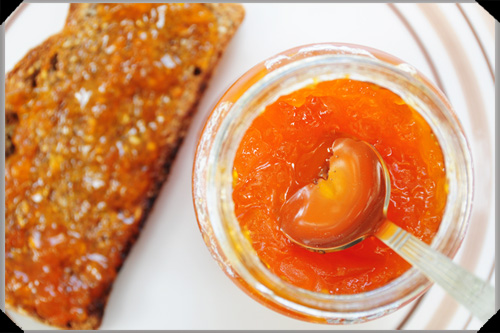