Potato galette: the 'tayto' part of the deal

Potatoes, rice, coconut and a late night conversation on twitter, ideas zipping between Jenni of Pastry Methods and Techniques in North Carolina, Tracey of Tangled Noodle in Manila and my good self in Dublin. With a tip of the hat to each of our food loves, we concocted the idea of making a dish with spuds for me, rice and coconut for Tracey and (could it be done?) something sweet and pastry-like for Jenni. Thus #TaytoRiCo was born.

Some failed experiments later (including the dense-as-all-hell starchbomb that was the TaytoRiCo loaf) this is where the wheel stopped spinning for me: coconut rice on a potato galette, topped with, well, whatever you like, though I used prawns (because nobody said you couldn’t use prawns). Not quite the trip to pastryland I’d hoped for, but a happy little 3-way union all the same.

Hands up. I admit that this is cheating, kind of. At least, it’s an utter cheat’s version of coconut rice, because I made it by simply adding some coconut milk to cooked rice. With more foresight, I would have cooked the rice in coconut milk and probably infused it with some interesting Asian flavours, but, as it was, I had cooked rice and coconut milk left over from another, less successful, TaytoRiCo experiment, so that’s what I used, along with a squirt of sriracha, because that just makes everything better. 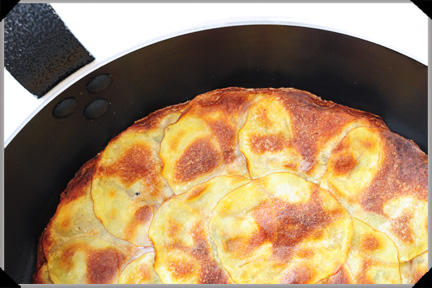 This is really just a thin version of Crusty Potatoes Anna, with 2 layers of potato slices, brushed with clarified butter and baked in a hot oven until golden and crispy.