Dishing It Up For Ireland

If it was your mission to design a new signature dish for Ireland, suitable for service in the finest restaurants, then just what would that dish be?

That’s the question being asked of chefs and cooks, professional and amateur alike, in a competition being run as part of the Só Sligo Food Festival. The festival, one of an increasing number of food-centric events to be found gracing the Irish calendar, will see that particular corner of the north west awash with edible possibilities from the 16th to the 20th of this month.

As to the question of the signature dish, well, I don’t suppose a bowl of coleslaw would cut it? 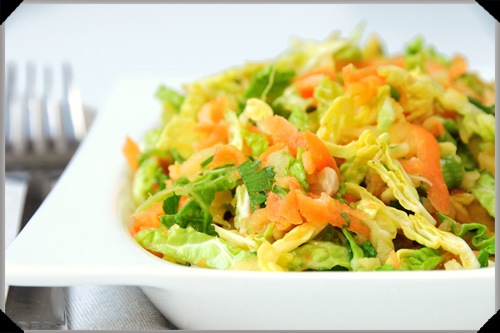 An Irish coleslaw: it's certainly got the national colours going for it

And yet this slaw is, in its own little way, an ode to the possibilities of Irish food; a demonstration of what you can do even if native Irish fruit and vegetables are thin on the ground (as they were on my last trip to the supermarket). On that trip, I did, however, manage to find natively-grown savoy cabbage, carrots and bramley apples and introduced them to some Donegal rapeseed oil and a splash of David Llewellyn’s cider vinegar for what was a satisfyingly Irish (and Paddy’s-Day-worthy) slaw.

For all its merits though, I doubt that the restaurants of Ireland will be falling over themselves in the race to serve up a new national coleslaw. As an emblematic Irish dish, it falls down on one point above all else: there are no spuds. Personal bias aside, there is no other food so closely bound to the Irish psyche, so a national dish must, of necessity, have potatoes. That doesn’t mean that they can’t cut a dash, though – might I suggest some individual potato cups as just one way to spruce up the spud.

There are, of course, many other things that can justifiably compete for a spot on the national plate: our grass-fed beef, award-winning black pudding, bacon, whether with or without the cabbage, smoked salmon, trout and mackerel, world-class farmhouse cheeses and, most especially on the western seaboard, our native seaweeds. It is a truly daunting task to decide how best to distill that abundance into a plated essence of Ireland. So much so, that I think, perhaps, I will leave that job to the competitors and stick to the coleslaw after all. 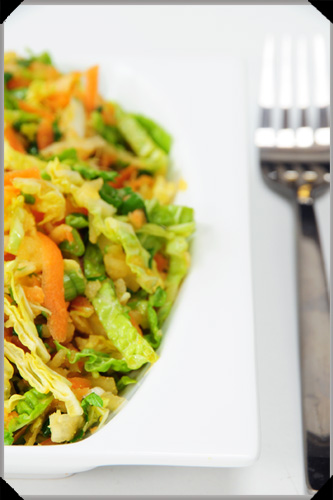 Not having been organised enough to get my greens elsewhere, I found myself in the supermarket skirting past broccoli from Spain, celery from Holland and Chinese cabbage from Turkey (if that’s not a contradiction in terms). Apart from potatoes, other Irish-grown produce was scarce, so this is what I made with the cabbage, carrot and apples that I managed to find. A coleslaw-like dish seemed inevitable.

I opted for a vinaigrette rather than mayonnaise-based dressing and, while you can obviously use the oil and vinegar that you have to hand, it’s good to know that there are native Irish choices available, like Donegal rapeseed oil and David Llewellyn’s cider vinegar. I also used local honey and a homemade Irish beer mustard as part of the recipe.

Before I go, here’s one for the road…

To that end, the good folks at L Mulligan Grocer have set out to develop an Irish coffee that brings together the best Irish produce available made by people who are passionate about what they do.

Throughout February and March, they have been serving Irish coffees made with hand roasted coffee supplied by three different roasteries, Ariosa, Hasbean (supplied and chosen by 3FE) and Bailie’s in conjunction with Coffee Angel. The coffees were chosen to complement the selected whiskey, Kilbeggan Irish Whiskey, distilled by Ireland’s only Irish owned distillery Cooley. The cream is being supplied by Glenisk, a collective passionate about Irish organic dairy farming.

They are looking for people interested in being part of a blind tasting panel on the evening of 15th March 2011 where the ‘Ultimate Irish Coffee’ will be crowned. The event shall be attended by representatives of each of the three roasteries, distillery and creamery. There is no charge for the event but places are limited and booking is essential. To book, email: irishcoffee@lmulligangrocer.com