Pease pudding and saveloys! What next is the question?

See, I’d always assumed (as, I might add, did the person who added the subtitles above), that the line was “peas, pudding and saveloys”. I may not have known what saveloys were, yet it seemed only natural to suppose them sugary and sweet – sure they had to be, didn’t they come after the peas and the puddin’. It made perfect sense to my childhood brain. As it turns out, though, I was mistaken on all counts.

To be fair, I’d need to have grown up in the north of England to be familiar with either pease pudding or saveloys – the former a kind of savoury pâté made from split peas and usually cooked with a bacon joint, the latter, a spicy pork sausage.

Beyond my experience though it was, however, it was pease pudding that sprang to mind when I lately happened upon some yellow split peas. The descriptions I had read of pease pudding as being a kind of pâté or hummus got me thinking – and this, gloriously, was the result. 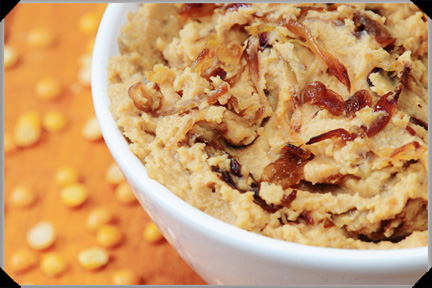 This is certainly not your usual hummus.

Apart from the fact that it uses yellow split peas in place of chickpeas, it forsakes tahini, olive oil and lemon juice in favour of fried onions, vegemite, mustard and sherry vinegar, with a more savoury end result.

If you’re not given to using vegemite (or similar pastes made from yeast extract, such as marmite), then go easy at first. They’re wonderfully savoury but are somewhat of an acquired taste and a little does goes a long way. If you don’t have (or don’t want to use) vegemite or similar here, you could probably try substituting some dark soy sauce for a different kind of savoury taste.

Oh, and another thing….
It’s that time of year again and nominations are open for the Irish Blog Awards. The Irish food blogger scene has been blossoming in the past year, not to mention the fact that we’ve now got our very own association, which means there’s bound to be some pretty tasty competition in the food and drink category. So get your nominating socks on and give the nod to your favourite (ahem!) Irish food blog over here.