I was meandering home down the dimly-lit side street, lost in thought, when something caught my eye and I halted. I looked down and could see, around and ahead of me, potato skins mysteriously scattered along the pavement. I glanced around furtively, a Poirot-like curiosity awakened, but could spy no shred of other vegetable matter in the vicinity.

For twenty or so yards, I followed the trail of distinctive pinky-red rooster peelings and stopped at a shabby green doorway. I imagined some unfortunate Hansel or Gretel, compelled to leave behind an identifiable trail, but were those peels leading away from that door or leading me, La Spud, to it?

I scurried on, the mystery unsolved. For days afterward, the trail remained and I wondered about it each time I passed. 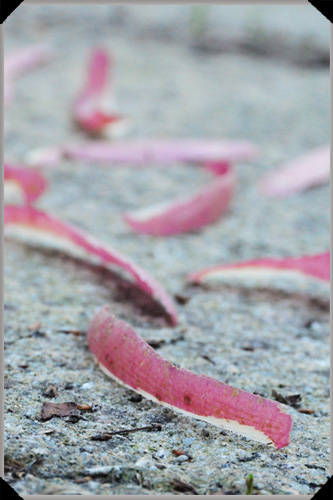 Where do you go to, my lovelies?

While I will probably never know the truth about those potato peels, I did get to pondering the usual fate of a potato’s skin. Sometimes eaten but, more often than not, cast aside – if not, inexplicably, on the pavement, then onto the compost heap or into the bin it goes.

It doesn’t have to be that way, though.

So it was that the next time I found myself wielding a potato peeler, I thought about putting the newly liberated peelings to better use. While the spuds themselves morphed into mash, their peels were shredded, fried and the two reunited to give the mash a new, crispy crown. It was like they were always meant to be together, no mystery about it. 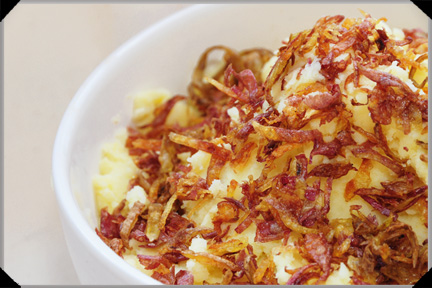 This is such a simple idea, it barely needs a formal recipe, beyond the instructions to shred the potato peels, fry until crispy and apply as a garnish.

It does, of course, assume that you are, at the same time, making some other potato dish (such as mash) which involves first peeling your spuds.