Och aye, a Scottish menu, even if you should understand nary a syllable, is nevertheless a pleasure to the ears. And I expect you’ll find Scottish menus aplenty this week, both in Scotland and elsewhere, as Burns Night, the annual celebration of Scotland’s national bard, rolls around this coming Tuesday.

Whilst haggis is the centrepiece of a Burns Night supper, you’re likely to find me diving fork-first into bashed neeps and champit tatties, the mashed turnips and potatoes that traditionally sit alongside. The turnip and potatoes are usually cooked separately, though the dish below, bearing another champion Scottish name, clapshot, combines them into one. Enjoy and here’s tae ye. 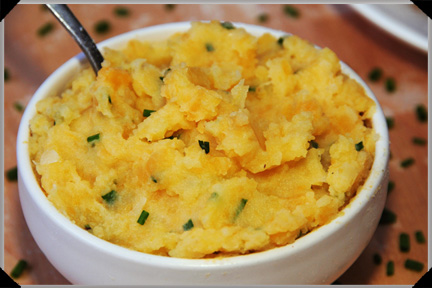 This is a fairly traditional rendition of Orkney clapshot, with the addition of a little mustard and lemon juice. To save inevitable confusion, let me clarify that what I call a turnip is what’s commonly called a swede in England, a turnip (or neep) in Scotland and a rutabaga in the US. It’s yellow-fleshed and sweet.

Meanwhile, if you’d like to try something really different with your neeps and tatties, you could do worse than take a peek at what I did neeps-and-tattie-wise last year.