For me, there is a reassurance and a comfort that comes with Christmas dinner traditions.

You know that, like them or loathe them, brussels sprouts will be served (and I, for the record, love them), while you will always clear a special spot on your plate for the yuletide favourite that are roasties.

My Da, though, couldn’t help but ask the question as he saw the spuds being peeled yesterday:

As if it would be Christmas dinner without.

But things change, too. In little ways. Every year.

This past summer, as I cooked my way through a bumper redcurrant crop, I made a chutney that seemed destined for the Christmas table. It might have usurped the cranberry sauce, though, in true Christmas spirit, there was room at the inn for both. 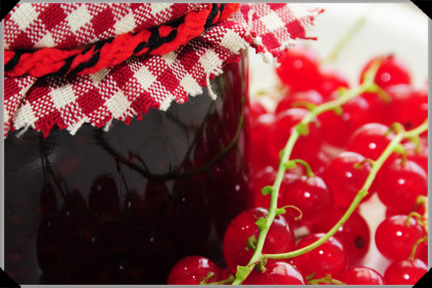 This is really a kind of spiced jam, with definite savoury applications – good with the likes of a Christmas ham, but also excellent served ploughman-style with some mature cheddar, goat’s cheese or stilton. I realise that it’s not exactly the season for redcurrants, though you could certainly consider making this if you had a frozen stash of same. Otherwise, file it away for use with next summer’s bounty.

It’s based somewhat on a recipe for pickled redcurrants which I found here, though the spicing is a little different. The amounts I’ve used are small, but you can easily make double or more if you have a lot of redcurrants to use and it will, of course, keep for months.