Thursday, December 23, 2010 / Daily Spud
If you are one of those people who just can’t, for the life of them, figure out what to get me for Christmas, then fear not, I have it sorted. Simply pop over to the Entertainment.ie annual awards site and cast a vote my way in the best blogger category. They’ll even allow you to cast a vote every day until voting closes on January 7th. It really is the gift that you can keep on giving.

Brrrrrrrr. So this is winter. Snow, ice and mercury that hasn’t risen above zero for days.

That coldness outside has seeped into my head and is manifesting itself as a dose of Christmas snuffles. Warming liquids are called for. 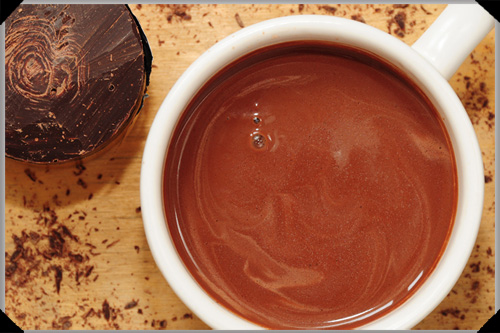 When it comes to liquid fuel, the Aztecs had the right idea. Steaming, velvety chocolate is a thing of wonder. Not the late night mug of cocoa that we might have grown up with, but a drink made by heating 100% cacao with water and adding however much sugar you like. It feels like a soothing injection of pure energy.

As luck would have it, I had bought a block of Willie Harcourt-Cooze’s 100% Peruvian Black cacao on foot of having attended a chocolate tasting with Deirdre from Co Couture, an award-winning chocolatier based in Belfast. One of the few Temple Bar Chocolate Festival events that escaped weather-cancellation, I slip-slid my way there and learned to judge a chocolate bar by its snap, to inhale its aromas and allow it to linger on my tongue, until it revealed itself as fruity, nutty, smoky, earthy, or perhaps something else entirely. We tasted, among others, some of Willie’s single-origin chocolate bars, which really highlighted both how different and how good chocolate can be, and today, in my mug, a warm, liquefied shot of Willie’s cacao was just about perfect.

As we talked about the different flavours in chocolate at the tasting, Deirdre said that when making truffles and such like, Co Couture generally use ganaches that are water-based rather than cream-based, as the cream will tend to coat the palate and you won’t experience the same flavour as without.

So, how better to sample some good quality cacao that a classic water-based hot chocolate. In Willie’s Chocolate Factory Cookbook, Willie Harcourt-Cooze includes, among many other cacao recipes, his Venezuelan Hot Chocolate, which is simply cacao, water and sugar or honey. Of course you can add milk, cream or other flavourings as the mood takes you.