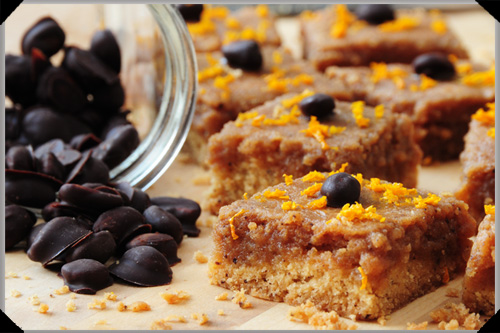 And the answer to that was, thankfully, no, not this time.

It was with an immense sigh of relief that I clapped eyes on the formula for butterscotch-glazed coffee shortbread bars sent to me by Lisa, from Lisa Is Cooking. Safe in the knowledge of the standard 3-parts-flour-to-2-parts-butter-to-1-part-sugar ratio for shortbread, I did not have to agonise over those 2¼ cups plus 2 tablespoons of flour. I could get on with delighting in the shortbread, which I did, very much.

I was so sorry to see the last of these bars go, in fact, that I’m baking another batch right now and inhaling the buttery aroma as I type. And a cup of tea or coffee is the only kind of cup I’ll need to make these perfect.

Lisa tells me that this is a Flo Braker recipe, originally published in the December 2008 issue of Food and Wine (that’s the U.S. magazine, not the Irish one of the same name). You can see Lisa’s own take on the recipe over here and I have done very little to change it, other than as noted below:

– I substituted a small amount of rice flour for some of the plain flour, which is what I almost always do when making any kind of shortbread, as it adds a slight sandiness to the texture, which I like.
– Instead of using light corn syrup in the glaze, I added golden syrup, which is a much more commonly available equivalent in these parts.
– I used a slightly smaller baking tin, partly because I didn’t have the larger sized tin specified and partly because Lisa reckoned that it would be nice to make the bars slightly thicker. It was. Good call Lisa.
– The recipe calls for chocolate-covered coffee beans and, as I didn’t have any of those, but did have chocolate and coffee beans, I made my own. See recipe following.
– I grated some orange zest onto the bars once they were done. It gave them a lovely festive lift, though they are just as good without.

Where relevant, I’ve given metric and imperial equivalents for the original cup measurements, so you can use whichever you prefer, though there are no prizes for guessing where I stand on that particular matter.

I considered buying some chocolate-covered coffee beans for the shortbread recipe, until I realised that I had both chocolate and coffee beans at my disposal, so I made my own. It hardly requires a recipe, really – the process can be neatly summarised as follows: melt chocolate, stir in the beans, leave to set. If you wanted to be fancy about it, you could temper the chocolate, but there’s no real need. As for amounts, I would say that around 25g chocolate should be plenty to coat 2 tblsp coffee beans.