Hector Ó hEochagáin acted as MC, while celebrity chefs and others flitted in and out of the Christmas kitchen setting in a presentation that often had little to do with cooking and, in Gino D’Acampo’s case, more to do with cringeworthy inuendo. 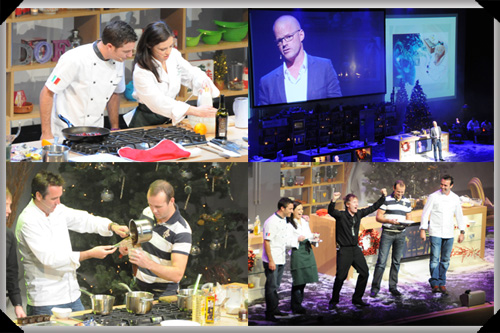 The big draw for me (and I suspect many others) was that Heston Blumenthal was appearing at some of these theatre sessions. Unfotunately, they neglected to mention that this would not involve Heston – one of the world’s most fascinating chefs – doing any cooking. A minor detail would you say? And while it was still a highlight to hear Heston talk a little about himself and take a couple of audience questions, I could not help but feel duped.

Suffice to say that the rest of my time at the event was better spent touring the various restaurant, food and drink stands, not to mention witnessing the occasional scrum by attendees for free Marks & Spencer mince pies. Now that, my friends, is entertainment. 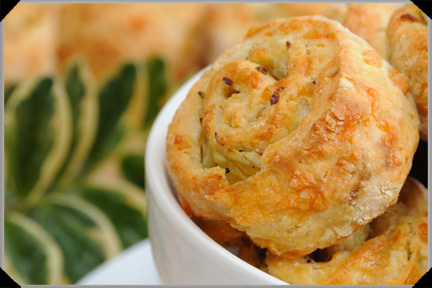 The method here is one that I saw Catherine Fulvio demo at Taste of Christmas, where she made a flavoured white soda bread dough, brushed the rolled-out dough with pesto, then coiled it up and sliced off individual scones for baking. A fabulously simple idea and endlessly variable.

This version here is inspired by one of my favourite Christmas foods: stuffing – that more-ish mixture of breadcrumbs, butter and onion, with maybe some apple, maybe some celery and always some sage. And while you wouldn’t really put cheese in your stuffing, I couldn’t resist adding some to the scone version because, well, the Taste of Christmas theatre show was nothing if not cheesy…