The astute among you will have observed that this week’s Spud Sunday is suffering from a mild bout of tardiness. If this were school, I’d have a note from my parents to say that it was their 60th wedding anniversary celebrations that had me otherwise engaged this weekend. Either that or I would be trying to convince someone in authority that the dog had eaten my blog post. Sure by the time I got to it, all that remained were these few potato crumbs, your honour. 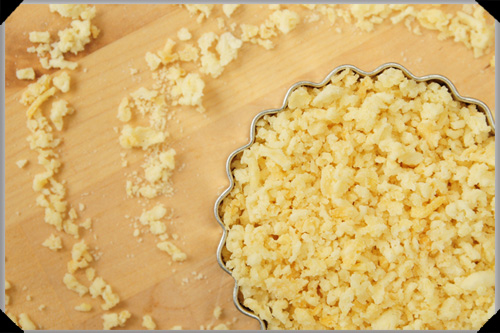 Still, crumbs though they may be, they are worthy of mention.

They started out life as leftover riced potatoes, spent a bit of time in a low oven, and emerged dried, golden and crunchy. They could easily take the place of breadcrumbs if you wanted to top a savoury pie in a gluten-free way or, fried briefly in a little oil, you could sprinkle them on soup instead of croutons. You might even find yourself eating them as a snack. They will keep in a sealed container or ziploc bag in the fridge for several weeks or they can hang out in the freezer until you have something for them to do. Not bad for a few old crumbs, all the same.

So, what we have here is really no more than plain boiled potatoes which have been mashed (or preferably riced) and then dried out in the oven.

Please do remember to salt your water well when boiling spuds (I’d add around a teaspoon of salt for every 750mls of water or so) and, if you like, you can introduce more flavour by adding a couple of crushed garlic cloves and a sprig of rosemary or thyme to your boiling water. You’ll get a better-tasting crumb if you do.