My desk is all a-clutter. Assorted items clamour for my frequently divided attention, and, lately, suffer from varying degrees of neglect.

Over there, my review copy of Domini Kemp’s new book, Itsa Cookbook, languishes. Frankly I got distracted when I read therein that her granny cooked potatoes in a pressure cooker, and have been more interested by the idea of emulating that than by anything else in the book (though I can safely say that fans of Domini’s Saturday columns in The Irish Times will be pleased to know that they can now get themselves a bookful of same).

Also sent to me lately, a glossary of delightfully named Scottish delicacies. The name alone makes me want to try Cullen Skink, a soup of smoked haddock, mashed potato and onions, though desire and execution are proving, as often happens, to be two very different things.

Other bits and pieces, such as reminders of upcoming food events, like the Food and Wine Christmas Show in the RDS from November 26th to 28th, as well as a slew of potato-related news stories, crowd my inbox.

Last Friday, as part of the Savour Kilkenny festival, food producers, food writers, and representatives of organisations involved in the promotion of Irish food gathered to talk. Attendance and the opportunity to make a presentation were open to all, in return for bringing lunch to share with the assembled masses. The event was pointedly not about selling anyone’s individual brand or product but about community, communication and issues that concern us all as a food producing nation. 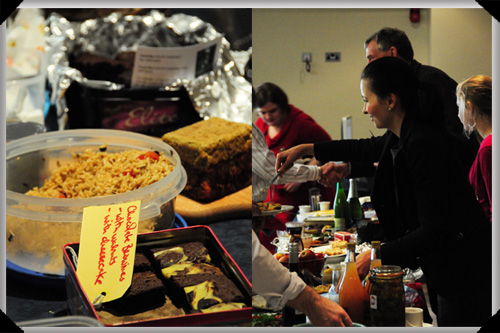 Dishing out lunch at foodcamp, where there were a lot of brownies

While everyone who attended will have their own takeaways from the day (including, but not limited to, the leftovers from the communal lunch spread), this particular one stayed with me:

If I know anything about Irish food, I know that when it is good, it is very, very good. It deserves to grace many more menus than it does. More than that, though, we all have a vested interest in the regrowth of our local economies, so there is a good business reason to put our local Irish food on the menu.

John McKenna, he of the Bridgestone Guides, observed that, while the economy at large may be in a shambles, those producing and supplying top quality food are doing well, especially those that have embraced new, social-media-led forms of communication to engage with their customers. Co-operative efforts between producers, restaurateurs and retail outlets, such as the Kilkenny Food Trail and the Tipperary Food Producers Network, also help to increase visibility for those involved, though, in order to increase local variety as well as overall export potential, there is a need, and consequently an opportunity, for more producers to become involved.

Yes, opportunity in a recession.

Be it anything from honey – given that we import €12M worth of the stuff annually – to fish, where some 86% of our catch leaves the country without any further value being added, there is scope for new food businesses to develop. Organisations like Bord Bia can help, but so can savvy usage of social media platforms, as the success of Harry’s Bar & Restaurant on the remote Inishowen Peninsula proves.

Embrace your own (food) culture but do it well.

In other words, there’s nothing wrong with selling brown bread and apple tarts if that’s what people are happy to buy. Just make sure that your bread and tarts are the best that they can be.

And, while you’re at it, if they are that good, you might want to let the growing ranks of Irish food bloggers know about them. That would be where the newly formed Irish Food Bloggers Association comes in.

Launched at Foodcamp by Caroline of Bibliocook and Kristin of Dinner du Jour, it’s an exciting and timely development. The new association provides a central resource for Irish food bloggers and those who want to get to know them. And sure who wouldn’t want to do that.