Sunday, October 17, 2010 / Daily Spud
And so, for those of you who have been following along, my Project Food Blog odyssey has come to an end. The world, it seems, was not ready for boiled boxty. That, in my humble opinion, is their loss. Now, though, it’s high time I returned you to your regularly scheduled Spud programming where, this week, Spud goes Indian…

People who follow the recipe to the last word are the most boring people. Use your instincts. Chefs may have created combinations which (they think) are fantastic but you, you create your own fantastic.

I scribbled furiously. Those words just uttered by Atul Kochhar were words to cook by.

I had been waiting a long time for my date with the Michelin-starred Indian chef, but last weekend’s one day course with Atul at the Dublin Cookery School was worth every minute of that wait.

In truth, the menu for the day, which included naan bread, pulao rice, dal, lamb rogan josh, homestyle chicken curry and mango chutney, sounded like bog-standard Indian restaurant fare. And that may have seemed, to some at least, to be at odds with the chef’s Michelin stardom. But to think that was to miss the point. Absorb what the man had to say about spices and oils, about onions, garlic, ginger and lentils, and you could begin to make that Indian menu your own. 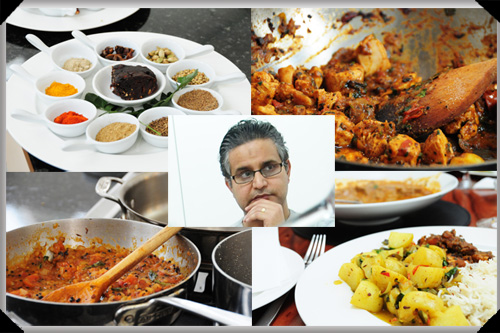 It starts with understanding that as spices grow old, they lose their pzazz, so you buy only small amounts of whole spices, store in well-sealed containers and grind if and when you need to. Though I knew this in theory, the occasionally ancient contents of my spice cupboard indicate that my practice has been different. Oops.

When the time comes to cook, you can start encouraging those flavours to come out by pounding whole spices. After that, you will need to introduce your spices to oil and to heat. The oil must be hot enough for the spices to sizzle and release their own natural oils, but it should not be smoking. What that means is:

You should never use olive oil for Indian cooking.

Probably shouldn't use Olive Oyl either...
(image from www.popeye.com)

The lovely flavour of olive oil is best reserved for Mediterranean purposes, whilst its low smoke point means that it doesn’t become hot enough for spices to really open up. What you can use is a neutral vegetable oil, such as grapeseed, instead.

In fact the fat or oil used in cooking is probably the single biggest distinguishing feature between the different regional cuisines within India: in the north, they tend to use butter or ghee, in the south, coconut oil, mustard oil is used in the east and sesame or ground nut oil in the west.

Regardless of the type of oil, however, you can be fairly safe in the assumption that Indians use a lot of it. There were audible gasps from the course attendees at the liberal pouring of oil at the start of every dish. That, Atul counseled, was needed for the onions. 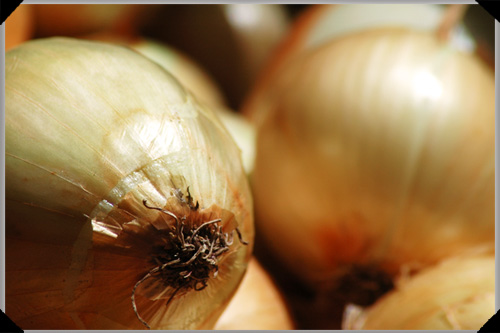 He stressed that it was important to cook onions properly and they needed plenty of oil for that to happen (when pressed, he did say that you could drain excess oil off after the onions were done). Salt, by drawing moisture out, would also help onions to cook evenly, but other additions, such as ginger/garlic paste, should only enter the fray after onions were cooked to the degree required – be that translucent, golden brown or very brown.

While oil was the key to onions, salt was the key to lentils. In India, we were informed, lentils are always cooked in salted water, in contrast to the French-lead practice which dictates that salt should only be added towards the end of cooking, for fear that the lentils won’t soften. That fear, Atul says, is unfounded. An entire subcontinent agrees and has more flavourful lentils as a result.

And as he added more butter to the potatoes in his bombay aloo, he paused to address his Irish audience. 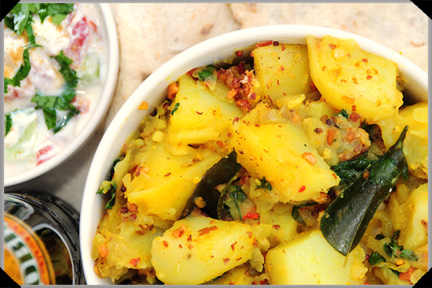 This is adapted slightly from the version of bombay aloo that we made during the course with Atul Kochhar. You can really use any kind of potatoes for this, though waxy ones will hold their shape better.

Atul’s recipe as written down didn’t specify ginger but I swear I saw him add some, so I followed suit. I threw in garlic because, well, I like garlic. I also included peanuts, which Atul mentioned would be a very typical addition to this dish in Gujarat, and a very good call it was, too. The result is my own kind of fantastic.