Sunday, October 3, 2010 / Daily Spud
Ooh, can it be that I am in round 3 of Project Food Blog? A massive thank you to all who cast their votes my way in round 2 – I’m excited to say the least! My mission in this round? To host and present, for your delectation, a luxury dinner party. You can vote for entries in this round between October 4th and 7th (get yourself over here to do so), but first, some news headlines… 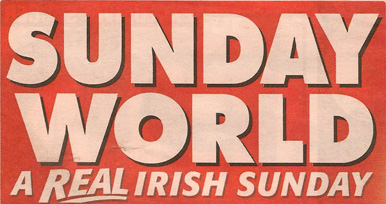 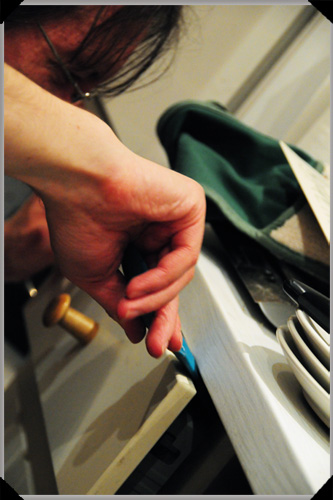 It shall hereafter be known as the great cutlery rescue of 2010.

Your guests have arrived. Dinner isn’t near ready so you distract them with prosecco (dinner party tip #1: keep the guests’ glasses filled at all times). When, after much frazzlement, you are about to serve the first course, you find that the overstuffed cutlery drawer has become stuck. The guests are called upon to try their hand at releasing the drawer (dinner party tip #2: involve your guests in the, er, prep). The drawer is freed to much applause and relief all ’round.

Now, as to why the cutlery was still in the cutlery drawer instead of gracing some sumptuous table setting, the reason is simple – there was none. No table I mean. My new compact-and-bijou abode lacks both a dining room and dining table, while the kitchen is only licensed to hold one person at a time. Dinner guests would have to sit on the couch with their plates in their laps. 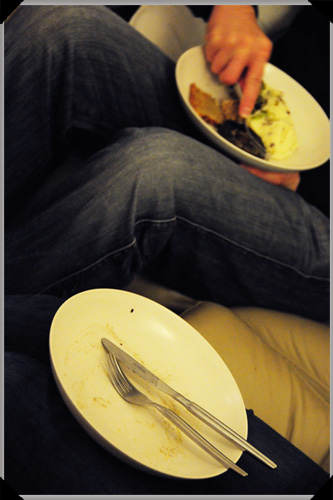 Dinner is served... in your lap

Fair point, the setting was not luxurious. The menu, on the other hand, was quite another matter. I was determined to introduce my guests to “new tastes and exotic flavours” without having to abandon my country for another cuisine. This would be a defiantly Irish dinner.

“Hang on,” says you, “why not go for, oh, some fabulously flavoured Indian food. Isn’t Irish food just that little bit, well, bland and boring?”

That, my friend, is where you are wrong. 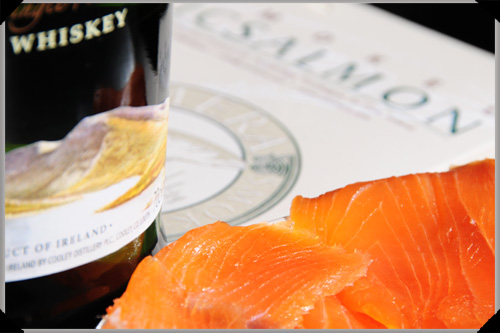 The opener for my Irish menu was an easy choice: I simply borrowed Pádraic Óg Gallagher’s combination of smoked salmon and Connemara peated whiskey.

As a dish, it is Ireland defined in a single bite. It also (yay!) has the advantage of being a doddle to prepare (have salmon? have whiskey? you’re done; which leads me neatly to dinner party tip #3: easy-to-prepare dishes are your friends). 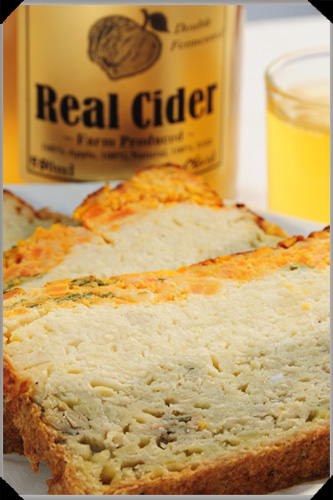 For the starter proper, I will admit to having ignored dinner party tip #4: make dishes that you have made at least once before. Instead I winged it, big time.

My tri-coloured terrine – a homage to Irish vegetables and Irish colours – was previously unexplored territory. Nervous minutes passed, wondering if the damn thing would set properly. More applause from the guests when it finally emerged in its Irish flag glory and was declared a resounding success (dinner party tip #5: nothing like a bit of drama to keep the guests entertained). The nip of Irish cider provided a fruity contrast to the terrine, though at that stage I needed it more for medicinal purposes. 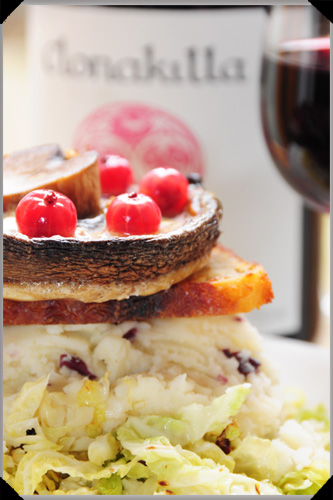 The main event saw potato served in two different ways, because it simply isn’t an Irish dinner otherwise. The gloriously now-crisp, now-chewy fried-in-butter boxty included some full-flavoured Desmond cheese, while the creamy mash was shot through with dillisk, an Irish seaweed with a savoury, almost spicy flavour.

The cabbage wasn’t just cabbage either, having the less-than-usual addition of fragrant juniper berries.

And there was more butter and cream, this time heaped generously on garlic baked Irish mushrooms, with a welcome burst of tartness from my very own pickled redcurrants.

And while Ireland may not be known for its wine, we do a good line in winemakers, as the Clonakilla shiraz will testify. I, on the other hand, do a good line in dinner guests (dinner party tip #6: this may seem obvious, but invite people you like), who happily ate and drank and asked for seconds (dinner party tip #7: always make more food than you think you will need). 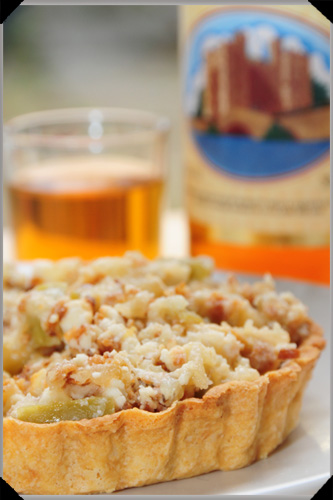 In the end, there was only one real way to finish proceedings and that was with a nod to the quintessential Irish dessert – the apple tart. My apple tartlets, however, were quite unlike the Irish mammy version, having apple mixed with soft, fresh and delightfully floral Bluebell Falls goat’s cheese, along with honey and rosemary, a combination I had made before, and which, better still, lends itself to being made in advance (dinner party tip #8: well, naturally, if you can make ahead, do).

And I doubt many Irish mammies would be found serving their apple tarts with a glass of mead, though if traditional honey wine was good enough for the ancient high kings of Ireland, then it was surely luxury enough for my guests. 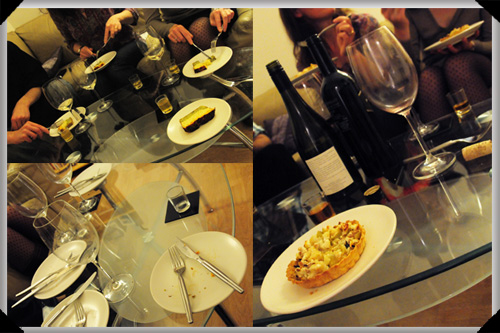 Marrowfat peas, parsnips and carrots – all familiar occupants of the Irish dinner plate. Here they are baked into a terrine with the wonderfully nutty St. Gall cheese from Cork and, yes, a lot of eggs. 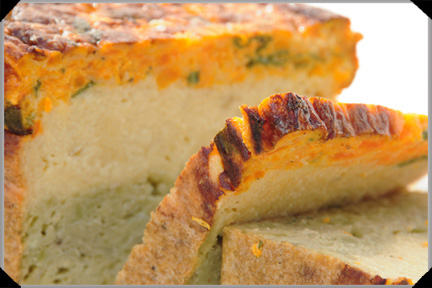