Fish-A-Leekie Pie (a Fish Pie with Leek and Potato) 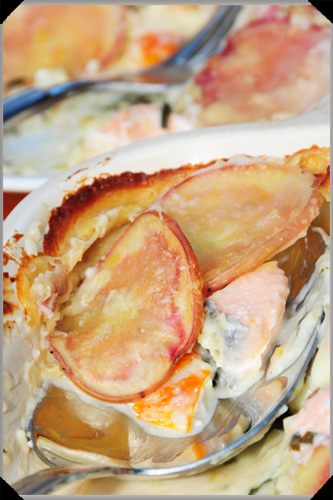 As you might expect, this pie takes its lead from the recipe for Bentley’s fish pie, which is included in Richard Corrigan’s fine book, The Clatter of Forks and Spoons [1]. I’ve used a similar creamy white wine and thyme sauce and a mix of smoked and unsmoked fish, as does the Bentley’s pie, though I’ve added leeks and capers and swapped the mashed potato for a topping of potato slices.

While I might mourn the departure of Bentley’s and its fish pie from Dublin, having this in my repertoire will ease the pain considerably.

For the rest of the pie: