So, if you were looking for someone to go and talk spuds with a commercial potato grower, who would you ask?

It seems, what with the new potato season upon us, that the folks from Bord Bia were pondering that very question lately. The result of their ponderings was that they came knocking upon my door.

Soon afterward, I found myself in the middle of a potato field in North County Dublin having a most illuminating, spud-filled conversation. You can read all about it over on the Best in Season website, but I’m also including the full text here.

I am indebted to my interviewee Barry for his time and his candor. Enjoy. 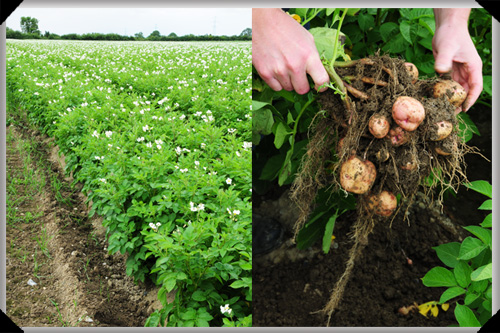 “A Queen or a Pink.” So said Barry White of his favourites when I asked.

Given that line, you might suppose that I was conducting some kind of bizarre musical interview. However, the Barry White in question is a farmer of potatoes, and (that I know of) no relation to the soul singer of the same name. Queen and Pink, meanwhile, refer to British Queens and Kerr’s Pink potatoes. Not rockstars, but top of Barry’s hit parade nonetheless. They are floury spuds both and, to be honest, I wouldn’t have expected an Irish farmer’s spud of choice to be anything other than a potatoey ball of flour.

I was visiting Barry at the farm he runs in North County Dublin with his father Pat, where, amongst other agricultural enterprises, they have 180 acres planted with potatoes, including Roosters, Kerr’s Pink, Queens and Golden Wonder. For a potato-obsessed gal like myself, this was the golden ticket. The opportunity to go and talk spuds with a commercial potato farmer at the start of the new potato season was one that I could not pass up.

While I expected that the reality of growing potatoes on a commercial scale would be a world apart from my own back garden efforts, I don’t think I had appreciated just what a challenging environment faces the commercial potato grower nowadays. Barry will tell you that it’s a tough business and getting tougher. My hat is off to those like him who continue to stick with it.

“People used to eat spuds every day, but not anymore”, he says.

Yes, we may still love our spuds, but, alas, not as much as we used to. Farmers like Barry are thus faced with the problems of oversupply in a shrinking market, the ever present risk of losses to blight and frost, and constant downward price pressure from the supermarkets. Throw in a plethora of government rules regulating their operations and you start to get the picture. 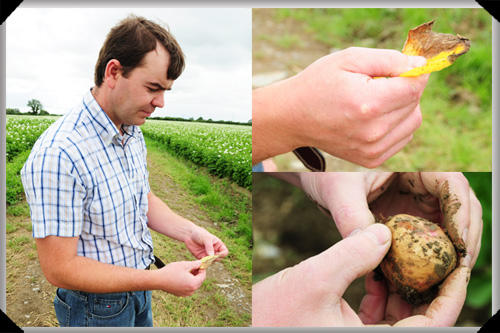 He also points out that we have grown very attached to the potato that scrubs up well. These days, spuds need to be clean and good-looking to achieve any kind of premium grading and price. Me, I’ll take a spud with a bit of dirt on it any day, but I’ll grant that I’m not the common case anymore.

We are also, as a nation, becoming less aware of different potato varieties and their seasonality. As Barry knows only too well, refrigeration has made year round availability of our most widely grown Rooster potatoes a reality. Many people don’t think to reach for anything else. Take it from me, though, that, at this time of year, it’s well worth visiting your local shop and seeking out that bag of clay-covered Queens. You might even be lucky enough to find some grown by Barry. A friend of mine whose parents live near the White’s farm eats their potatoes regularly and will attest to their fine floury quality.

And finally, of course, if you do get that bag of floury Queens, take care to cook them properly, as many have cursed their tendency to burst apart upon boiling. Barry’s preference is to boil them for 15 minutes and, before they start to disintegrate, he puts the pot into the Aga to steam for another 15 minutes or more. He’ll eat the results, skins and all, with butter, salt and pepper. Believe me, you’ll want for nothing more.