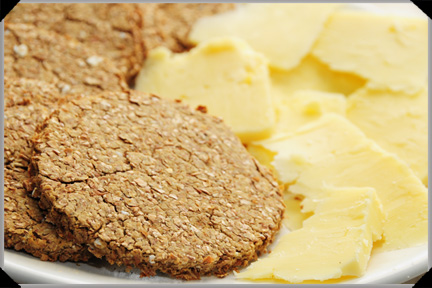 Oatcakes might well be one of the definitive Scottish foods. Goodness knows, they’ve been around for a long time. According to my Little Scottish Cookbook [1], the 14th century chronicler Jean Froissart [2] recorded that Scottish soldiers would carry a flat plate and a wallet of oatmeal. Using a little water, they could always make themselves an oatcake over an open fire.

In their traditional form, they are an austere kind of food. Just oats, salt and bread soda mixed with a very small amount of liquid fat and water. That doesn’t mean that they’re not good, though. I became very fond of the excellent bran oaties from Wooleys of Arran [3], which add wheat bran and a small amount of brown sugar to what otherwise seems a fairly traditional formula. Having very quickly eaten through my stash of said oaties, I found myself needing to recreate them and fast.

Taking Wooley’s lead and replacing some oats with wheat bran and adding a spoon of sugar, I ended up with something that wasn’t a bad approximation of the original. Not as crisp and perfectly baked, mind, but I was still happy to scoff them. I also took the step of toasting the oatmeal first to try and bring out its nuttiness, though feel free to skip that step if you like.