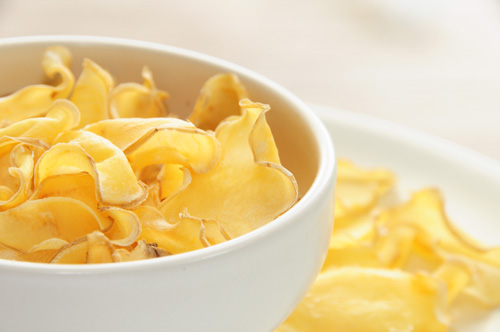 Fond though I am of a proper bag of crisps, I don’t mind telling you that I am more than a little excited by these.

Paper-thin slices of potato, soaked in salt and vinegar, then dried to a crisp in the oven.

I’ll grant you that these are not likely to usurp their fried-in-oil cousins anytime soon, but they do make a good case for themselves as a light and crispy snack in their own right. And they’re positively healthy to boot.

These crisps were the very happy combination of ideas from 2 different bloggers.

I was firstly intrigued by a recipe on 101 Cookbooks which involved grilling slices of potato that were first parboiled in vinegar. Then, over In Jennie’s Kitchen, I spotted some oven-dried slivers of potato and, hey presto, these crisps were born.

The idea couldn’t be simpler.

Take paper-thin slices of potato, soak in salted vinegar for 10 minutes and bake in a very low oven until crisp. If you don’t want vinegared crisps, just soak in salted water instead. If you like, you can bake the crisps without soaking and then sprinkle with some coarse salt, but I like the results better when they are soaked in salted liquid first.

If it’s real crisps you’re after, you could do worse that to seek out a new entrant to the Irish crisp market. I had the opportunity to sample some of Ed O’Donnell’s Tipperary Crisps during the week and, my, but they are worthy of your attention. 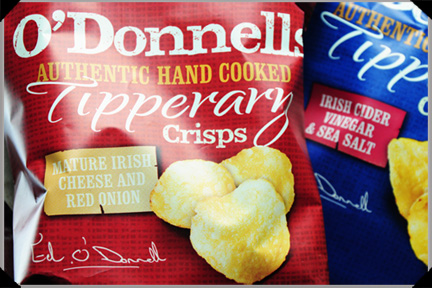 They are naturally appealing for the fact that they use fine, locally sourced ingredients, like Mount Callan cheddar and cider vinegar from Tipperary’s Apple Farm, but mostly they just taste good. The cider vinegar and sea salt flavour I thought an especially fine example of the genre. Here in Ireland, look for them in SuperValu or Centra.