Last Of The Summer Rhubarb

1. From another part of the world; foreign;
2. Intriguingly unusual or different; excitingly strange;

There will, no doubt, be much that fits those descriptions at this weekend’s Festival of World Cultures in Dun Laoghaire. A gloriously bubbling stew of music, dance, crafts and food from the far flung reaches of the globe. Even if food were your only interest – and who would I be to judge you for that – the festival’s International Food Traders would surely warrant a visit, as would the Global Village and the South Asian Mela Market.

All told, not a bad way to spend a few days. However, as luck and my projected geographical location for the weekend would have it, I will miss the entire thing. Clearly I will have to compensate by cooking something with a suitably international pedigree. Like ketchup. And if you suppose that such a ubiquitous sauce is too familiar to be exotic, you might have to revise your thinking when you meet the variety made from rhubarb. 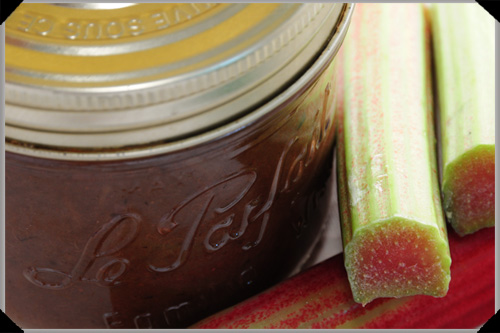 See, the first thing you need to know is that, while tomato ketchup might hold a rather dominant position in the global condiment market, it isn’t even the original of the ketchup species.

What were called catsups originated in China and were discovered there by East India merchants sometime in the 17th century, who then introduced them to other parts of Asia and thence to Britain and beyond. Most early catsups were based on mushrooms and it was only when the tomato become more popular in the 19th century that tomato catsup start to emerge.

The chief virtue of early catsups was that they kept for a very long time and were thus popular on long sea voyages. In her book Curry, Lizzie Collingham reports on a recipe that Hannah Glasse provided in the 1748 edition of The Art of Cookery. The recipe, addressed to the “Captains of Ships”, called for stale beer, anchovies, mace, cloves, pepper, ginger and mushrooms in order to make a “Catchup to keep Twenty Years”.

Now, while I do expect this rhubarb ketchup to mature nicely over time, I can’t really guarantee that it will keep for 20 years. I, for one, could not restrain myself from eating such a tangy, fruity concoction for anything like that long.

I was casting around for something to do with the rhubarb from my garden, which is rapidly approaching the end of its season, when my beady eyes lit upon a recipe for rhubarb ketchup in Pam Corbin’s lovely book Preserves: River Cottage Handbook No.2 .

I would have to say, however, that my efforts at making this did not go according to the recipe plan – a plan which involved roasting rhubarb, onion and garlic, pushing the results through a sieve and then combining with vinegar, sugar and spices. My vegetable charges were nearly roasted into oblivion after the suggested roasting time, and pushing the results through a sieve would have yielded a miniscule amount of pulp. So I just took my roasted results, blended them with the other ingredients and adjusted amounts and the recipe accordingly.

Fortunately, I don’t think the result suffered. In fact, having opened the first batch after 3 weeks, I feel a distinct urge to make more so that I can eat it with Indian-style curries, mix with yoghurt for a tangy dip or just dollop onto the nearest plate of chips.

A word of warning: Do watch out for splashes as the ketchup simmers. My mixture was very thick and given to dangerous little eruptions, so it was important to keep it covered while simmering and to remove from the heat before checking progress.