I made these last week as a little contribution to the Twookieparty, a twitter-based event where assorted Irish food bloggers got together in that virtual, Internet sense and baked their socks off.

Given that these involve chocolate chips and are based on an American recipe, they really do invite the term cookie. Crisp at the edge and chewy in the middle, they are adapted slightly from a recipe for Cherry Oatmeal Cookies in Cindy Mushet’s impressive tome, The Art And Soul Of Baking [1] – part of the hefty swag from last year’s IFBC [2].

The original recipe calls for dried sour cherries, but, having a lot of redcurrants at my disposal just now, I dried some to use here instead. You could also use dried cranberries or any other dried fruit that has a bit of tartness to it.

I can guarantee that I will be making these again very soon. 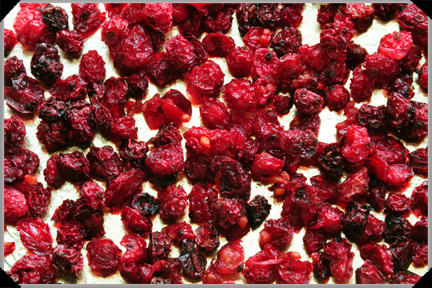 One of the joys of having a generous redcurrant harvest is that I could afford to experiment with slow-roasting as a means of drying some of my redcurrants out. They lose a lot of volume in the process, but there really is a nice concentrated tartness to the end result.