It was the simplest of ideas. To meet of a summer’s evening, drink tea and eat cake.

Gisela, from Life is a Festival, who organised yesterday’s Dublin Tea Up, asked only that you bring yourself, your favourite mug and a baked contribution if you were so inclined (and yes, as you’ll see later, I was).

The result was an Irish teatime gone into overdrive – currant scones and butter, rhubarb tart, swiss roll, iced buns, treacly flapjacks and more. There was even a lady who, in true Mrs. Doyle style, would (go on, go on) offer you one of her baked treats (you will, you will) until such time as you took it (which I did, I did). 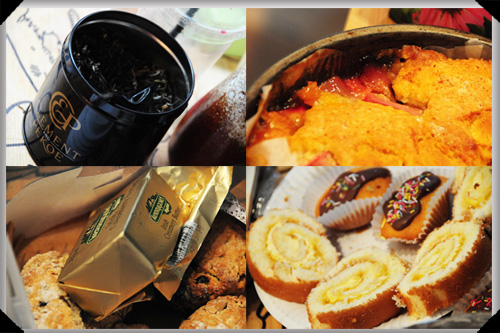 Tea from Clement & Pekoe plus lots of scones, cake, tart and buns

And there was tea, of course. A summer berry iced tea and some lovely loose leafed varieties dispensed by Dairine of Clement and Pekoe.

But more than cake and more than tea, there was chat (and even a tune or two). This was a diverse group of people from the arts, who, by and large, had not met before, except in the internet sense of the word. But it turns out that we had plenty to talk about over a cuppa (or several). It was the kind of gathering that, despite involving neither pubs nor alcohol, could actually catch on.

Speaking of gatherings, Sam from StreetFeast was there yesterday to tell us about their nationwide initiative, with Sunday July 18th being designated as a day on which to participate in local, community-organised lunches. StreetFeast is encouraging people to do what we did yesterday – to step out from behind the internet, bring some food, meet the people around you and have a chat – so why not join them. 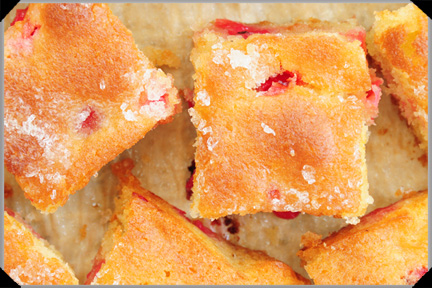 This was one of my contributions to yesterday’s feast of tea and cake. It’s adapted from a recipe entitled Lemon Crusty Cake in Sue Lawrence’s lovely book, On Baking. I adore the original – tart, sweet and moist all at the same time – a zesty lemon cake drenched in a mixture of lemon juice and sugar as soon as it comes out of the oven.

For a different, but equally tart effect, I have replaced the lemon zest in the cake with redcurrants, which are enjoying their short but glorious season. Raspberries would be an equally good choice.