Painted with some mighty inescapable strawberries. 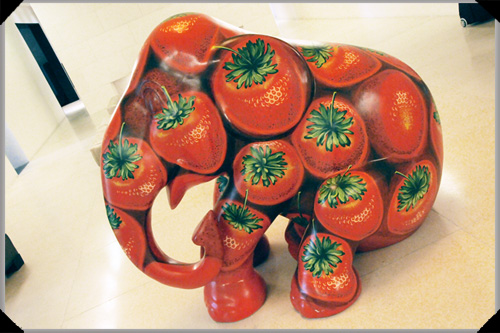 Let me guess, you've never seen a strawberry elephant before either...

The elephant was a resident of The Hempel Hotel in London, the venue for this weekend’s Food Blogger Connect 2010 (and, yes, I will be reporting on the bits of FBC that involved neither elephants nor strawberries in due course).

I think maybe the folks at Bord Bia had placed Mr. Elephant there as a not-so-subtle reminder to me that it was the start of Irish National Strawberry week. Like I needed a reminder.

I had already been displaying an elephant-like inability to forget that my last outing with strawberries wasn’t quite the success I’d hoped for. I mean to say, strawberries plus potato pancakes – I thought the idea had merit, though the pancakes I made at the time, unfortunately, didn’t. Now my elephant-shaped conscience was insisting I have another go. Who was I to argue? 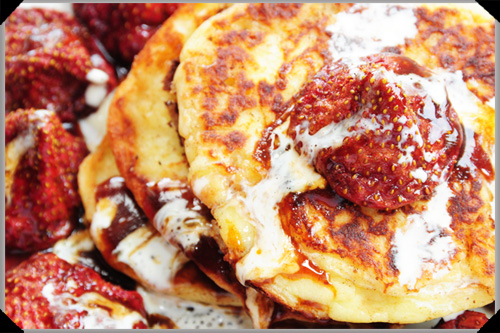 The result, I can at least report, was a much better incarnation of the strawberries plus potato pancakes genre.

A combination of better-than-jam slow roasted strawberries from Gastroanthropologist (whom it was a delight to meet in person at FBC) and Miss Jane Bury’s potato pancakes, a recipe dating back to the early 1700s and set forth in Colman Andrews’ fabulous tome, The Country Cooking of Ireland. 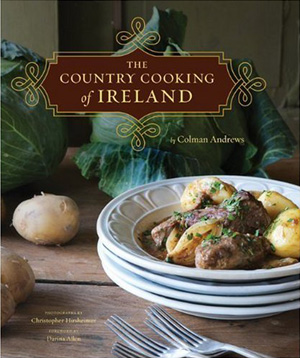 As Caroline from Bibliocook says in her review of this book, it should be thrust into the hands of all prospective tourists to this country. The potato pancakes, from a recipe collection now held in the National Library, are well worthy of being scoffed on their own (though anything spud-like and fried in butter always is). They can have savoury or sweet additions (hence the strawberries, which I ate with them), though I do think that they’re most at home on the savoury side of the menu, strawberry elephants notwithstanding. 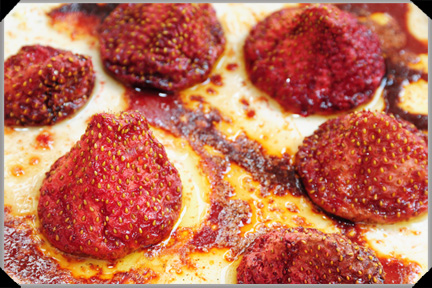 I was intrigued from the moment I read Gastroanthropologist’s recipe for slow roasted strawberries. Slow cooked and each delivering a concentrated strawberry hit, this I had to try.

I followed the instructions as she describes here with only minor adjustments. I didn’t have a vanilla bean but used a good quality vanilla extract instead. She also makes a sauce using the roasted strawberry juices along with Sauternes, though I used madeira instead, which made for a kind of tangy, fruity, toffee-ish sauce.

This is as per the recipe described by Colman Andrews in Country Cooking of Ireland, except that I made the individual pancakes smaller than originally specified, as I found my batter to be quite soft and the pancakes prone to disintegrate. Smaller, thicker pancakes held together better.

These are very simple, but rich. Tasty eaten just on their own or best with other savoury foods, though they’ll accept sweet accompaniment too (and, if you’re going the sweet route, I would be inclined to reduce the amount of salt in the batter, perhaps by about half).