Putting The Ham In Sandwich

You may think that it’s all fancy dinners and the like ’round here, but not so, I tell ya, not so.

For instance, the other day, I rushed home to take delivery of… 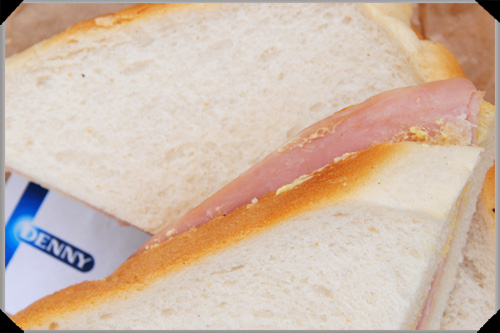 …a ham sandwich. Yup. White sliced pan, something butter-like and Denny ham. No more, no less.

Notwithstanding the fact that I’m not an eater of meaty sandwiches (oops, Denny forgot again), the significance of what is an Irish Institution was not lost on me. The ham sandwich (more properly referred to in certain parts of the country as the hang sangidge) has graced many’s the Irish lunchbox and been consumed by countless thousands of attendees at GAA matches, community field days and parish hall functions. A ham sandwich, thus presented, is nothing less than tradition between two slices of bread (though one to which you might just want to add a bit of mustard).

This tradition is the inspiration for Denny’s Taste of Home (outdoors) campaign which, in turn, is the reason I found myself in receipt of one iconic ham-filled lunchable, along with a list of Denny’s top 10 spots at which to enjoy same. These locations range from beautiful Glencar Waterfall in Co. Leitrim to The Burren in Co. Clare, and one presumes that they are equally well suited to the enjoyment of hamless sandwiches. (My own personal choice of sandwich filling would be Tayto cheese and onion, how ’bout you?)

Also included on Denny’s list of sandwich spots is next week’s Bloom In The Park festival and, let me tell you, if last year is anything to go by, there’ll be a lot more than ham sandwiches to be had.

While the show gardens are the centrepiece of the festival, this year’s programme guarantees that those with an interest in food and drink will be well catered for. With what’s being billed as their “totally edible garden”, Grow It Yourself (GIY) Ireland will be demonstrating the potential of a suburban vegetable patch. The artisan Food Market will include a Lost & Forgotten Skills display, with demonstrations of cheese making, butter churning, apple pressing and fish smoking (no prizes for guessing where you will find me, then), while the Craft Beer Garden will be dispensing Irish craft beers, spirits and liqueurs to the thirsty among you (ok, so you might find me there too). And if, after all of that, you should feel the need for a ham sandwich, Denny, I’m sure, will oblige.