Cool As A Cucumber Cocktail 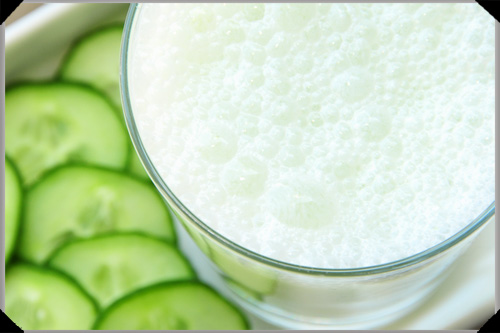 Cucumber in a salad is one thing.

Cucumber in a cocktail, well now, that brings a whole new meaning to the term salad bar.

To be honest, potato milkshakes aside, my culinary experiments don’t normally extend to the beverage side of the house. Mixing drinks chez Spud, generally speaking, features a bottle of gin in one hand and a bottle of tonic in the other.

But I am learning that it doesn’t have to be that way.

With her Thirsty Thursday posts, the Diva on a Diet regularly demonstrates the enjoyment to be had from mixing it up, drinks-wise, at home. Now, with her Thirsty Thursday Challenge, she wants us to do the bartending for a change. For my part, I took up the call (as suggested by Tangled Noodle), to elevate cucumber from its usual position in the salad chorus to the center-stage spot worthy of a cocktail star.

The result is what I have (rather grandly) christened the Cucumburt. It’s perhaps not as grand as all that, but it is refreshing all the same. It marries cucumber, yoghurt, ginger, mint and coriander, along with a measure of gin and tonic, because, let’s face it, those old mixing habits die hard.

The Cucumburt: A Cocktail of Cucumber and Yoghurt

This was very much inspired by the idea of cucumber and mint raita and is a close cousin of the Indian lassi, albeit one with a bit of a kick.

You can leave out the gin for a mocktail version or leave out both the gin and tonic for an entirely virtuous yoghurt drink.