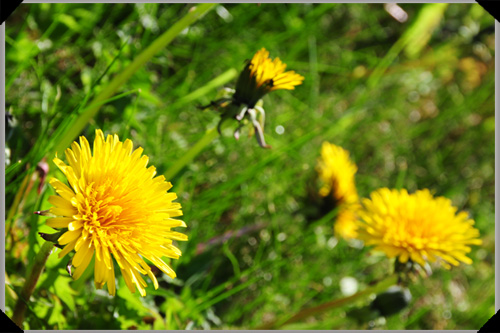 Claiming squatters rights to lawns and gardens everywhere, while gardeners and lawn keepers do their best to evict them. It’s a losing battle, frankly. Dandelions have sheer force of numbers on their side and they’re just too comfortable in the open, sunny, newly turned sod of the garden.

I, however, have a cunning plan. I happen to know that my yellow-headed tenants are blessed with lots of edible possibilities, therefore I shall simply eat them. Ha!

In fact, I might even advertise for more dandelions to move in:

“Seeking alternative bitter greens, for stir-frying and more, apply within” 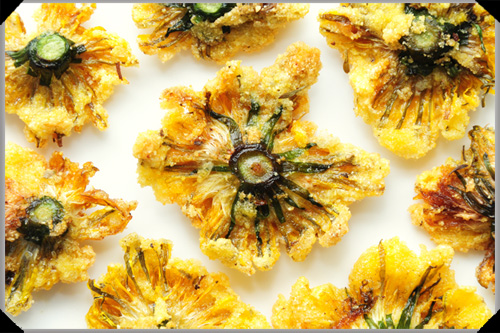 Oh yes, allow me to introduce you to fried dandelion flowers. Would that the solution to all of my weed problems were this simple. Dipped in seasoned flour or batter and fried, dandelion flowers can make a tasty (not to mention novel) snack – once you can successfully get your head around the idea of eating them, that is.

Notwithstanding the fact that I am quite happy to eat my wild garlic flowers, that I have used lilac florets to make ice cream and have eaten both stuffed courgette blossoms and nasturtiums, I will admit that eating flowers still presents me with somewhat of a mental hurdle. It’s one that I’m willing to overcome, however, so dandelions-in-residence beware. I have a frying pan and I’m not afraid to use it.

The trick here is to remove as much green material from the dandelion flower head as possible, while keeping the flower head intact. The green parts lend bitterness, so you want to minimise that, while the yellow flowers are mild-tasting and faintly sweet.

Before frying, you can dredge the dandelion flowers in seasoned flour or dip in batter. Personally, I like the combination of dipping, first in beaten egg, then in some seasoned polenta, which is what I’ve described below. The quantities are approximate and the seasonings can, of course, be changed as suits your mood and taste.

I have yet to try dandelion wine, but I can tell you that my attempt at dandelion coffee tasted bitter and soupy, so I don’t think I’ll be trying that again. My dandelion tea, on the other hand, made as described to me by my mother, was light, earthy and far more palatable. She remembers it being made as a drink during that period of wartime privation known here as The Emergency.

As dandelions are known to be a diuretic, this is probably something that you will want to avoid drinking in extremely large quantities.