Michelin Stars In My Eyes

Patrick Guilbaud took my hand warmly, as an old friend might.

He hoped that I had enjoyed my meal. “Ah, that dessert with the rosé…” he murmured, clearly reliving the pleasure of it in his own mind.

I, in return, gushed. My first time to eat at Guilbaud’s and, yes, the dessert course had been as sublime a pairing of food and wine as I have had the privilege of tasting. The rest of the meal I might add (in a clear triumph of understatement) was none too shabby either. 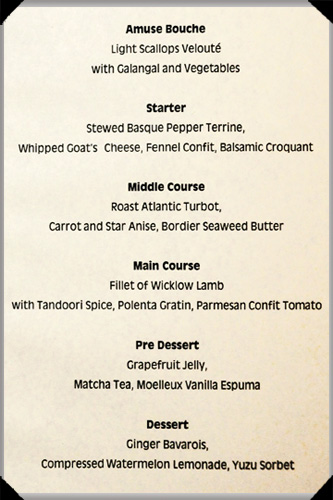 What you would call some very serious eats... 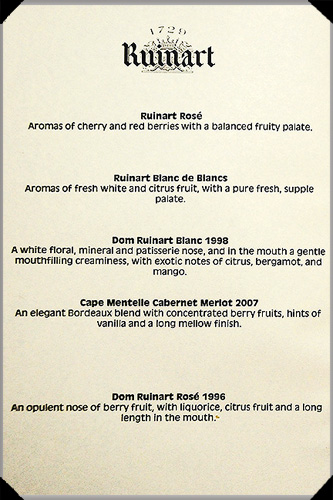 ...and the drinks to match

Proprietor of the legendary Michelin-starred restaurant that bears his name, Patrick Guilbaud displayed qualities that I would hope to find in any good restaurateur – a sincere pride in the food served and a graciousness in the service given. His restaurant, well deserving of its top-notch reputation, is the kind of place entirely appropriate to the occasion that had earned me an invite – a gala dinner showcasing Ruinart champagne. 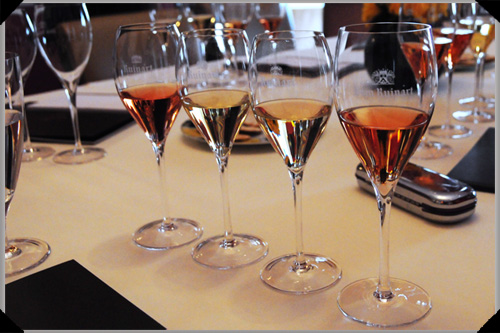 Four very fine Ruinart champagnes, all for me

I will admit that this particular brand of champagne was new to me, but a friend, having seen my drinks menu, exclaimed simply “Ruinart! The world’s best…”. That might just tell you something about it.

I learned more on the subject from Patrick Shelley, French-domiciled Irish man and International Director with Ruinart, who explained that it is the oldest champagne house around, established in 1729 by textile merchants who found that their clients soon showed far more interest in matters of bubbly than in matters of cloth.

And it is expensive, yes. Champagne generally is (er, except when somebody else is paying for it…). And this is the good stuff. Chardonnay-based, requiring delicate handling and bottle-aging for at least 3-4 years in cavernous chalk pits that date from Roman times. The signature Ruinart brand, the wonderfully crisp non-vintage Blanc de Blancs, will go on my wishlist for special celebrations. Fancy or what?

In fact I fully expect, by now, for you to be deeply concerned about the fact that I might be in danger of getting notions far above my humble spud station, dazzled by the bright lights of Michelin-stardom. Rest assured, however, that I will not be allowed to forget that ’tis far from Michelin-starred eateries and champagne that I was raised. My mother, for one, can be trusted to bring it right back down to the things that matter: