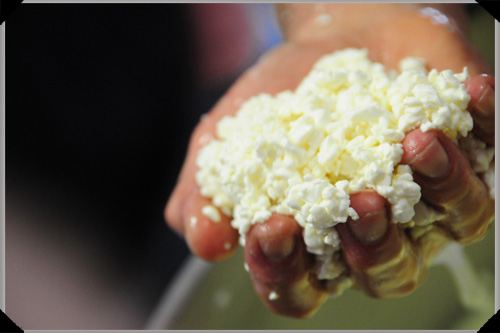 Milk curds, the stuff of cheese

“You need to be a bit mad to make cheese.”

So says Hans Wieland of The Organic Centre in Rossinver, Co. Leitrim.

I do believe that he counts himself in this. When he and his wife Gaby started making cheese from the milk of their own goats over 20 years ago, they built a kitchen for their cheese making before they built a house for themselves.

I learned this and a lot more besides when I headed to Leitrim last weekend to attend a hugely instructive cheese making course run by Hans and Gaby, during which we were taken through the processes of making both hard and soft cheeses and given an insight into the practicalities of small-scale commercial cheese production.

The biggest lesson of the course, and the one that I think they most wanted us to learn, was that, once you understand the basics of the processes involved, cheese making (and especially the making of soft cheeses such as quark) can be done quite simply and, for a small scale operation or for home use, without a lot of special equipment. You need a big pot for milk, some bacterial culture and rennet to separate curds and whey, a knife and whisk to cut the curds, a thermometer to make sure that the cheese making bacteria have a cosy temperature at which to operate, some muslin for draining the curds, some plastic moulds for shaping and a lot of practice. 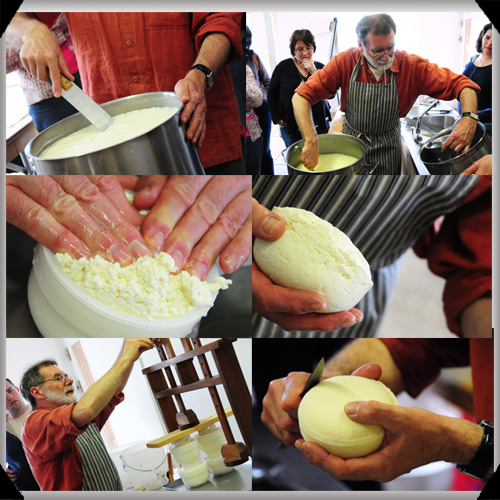 Cutting and washing, moulding and pressing - Hans puts a batch of curd through its hard cheese paces

As with cooking and baking, there are recipes for producing different kinds of cheeses, though with practice, you will get to know how the particular milk you use behaves during the cheese making process and adjust the recipes accordingly. If nothing else, learning how to make cheese forces you to discard the idea that milk is just, well, milk.

Milks can vary greatly in fat content and other characteristics, depending on the type of animal producing the milk, the breed, the vegetation they eat and the soil that produced that vegetation. The notion of terroir, it seems, is as relevant for milk and cheese as it is for wine. Raw, unpasteurised milk will generally produce cheeses with more flavour, but you do need to be sure of the quality of your milk supply if you go that route.

Different bacterial cultures, too, will produce different effects. For example, lactobacillus helveticus, developed in Switzerland, is responsible for emmental’s nutty taste, while propionic acid bacteria are the ones responsible for producing the holes (more properly called eyes) in that most swiss of cheeses. 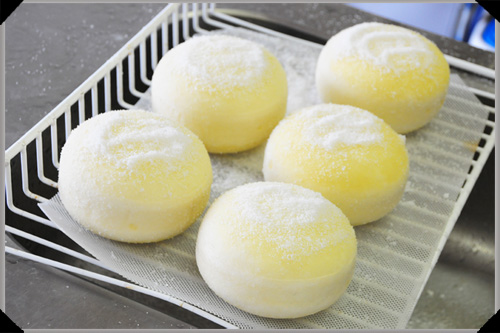 There are other factors, too, which influence the final cheese product. The size of the pieces into which you cut the curd, for example, will determine the hardness of the cheese – the smaller the curd particles, the less moisture they retain and the harder the resulting cheese. Washing and/or cooking the curd, which may be done after the curd is cut, also influences texture and taste – you’ll get a stronger-flavoured cheese if the curd is heated in pure whey and a milder taste if some of the whey is replaced with hot water.

And there is much else besides. The mere fact that there are so many vastly different cheeses to be had is testament enough to the many different factors at play in their production. 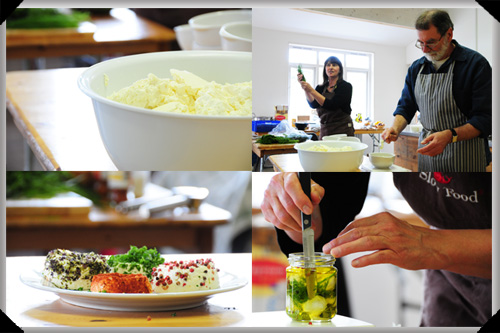 Gaby demonstrates some of the many soft cheese possibilities:
moulded and coated with herbs and spices or rolled into balls and stored in herb-infused oil

The only real question now is whether I am mad enough to make cheese myself.

Quark is a fresh soft cheese, made from either cow’s or goat’s milk which, with reasonably little effort, can be ready to eat within 24 hours.

Specialist cheese suppliers are your best bet for sourcing cheese making cultures and either animal or vegetarian rennet.

This was a wonderfully fresh-tasting combination that we got to try using some of the soft cheese made on the course. It goes without saying that you don’t have to make your own cheese in order to enjoy this, it’s just very satisfying if you do.

You can think of the quantities here very much as guidelines – just add as much apple, horseradish, lemon juice and salt to the cheese as is to your taste.

If, after all of that, you find that you are interested in scratching your own cheese making itch, I can highly recommend attending a course with Hans and Gaby. They have another cheese making course coming up on May 8th and 9th – see the Organic Centre website for more information.