Spud Sunday: Of Spice And Spud

It’s a conspiracy. No doubt about it. A conspiracy I tell you.

The fact of the matter is that London-based Michelin-starred chef Atul Kochhar is being thwarted in all of his attempts to meet me.

First, it was the January snow that scuppered travel from the UK and resulted in the cancellation of Atul’s one day course at the Dublin Cookery School, which I was due to attend. Then it was the preponderance of volcanic ash in the airspace hereabouts that meant he was unable to travel for the rescheduled date this weekend.

Much admired for his masterful use of spices, I had really hoped, by now, to be in a position to reveal Atul’s thoughts on the subject of spices for spuds, but there are forces at work that have determined otherwise. Perhaps it is the case that Atul is simply not ready to meet me yet – it’s a naturally big step in any chef’s career – but I rather fancy he can handle it.

And so, while I wait to hear of a new date for my tuition in the ways of Indian spicing, I content myself with using Atul’s rather wonderful book, Indian Essence, as my spicy guide. These potatoes with cashew nuts are a great example of where that can lead. 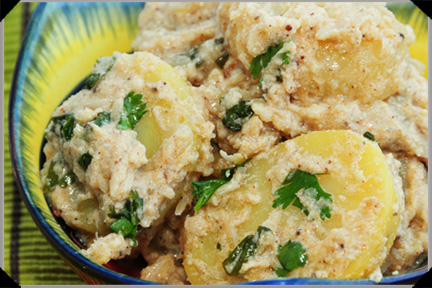 This is slightly modified from a recipe in Atul Kochhar’s Indian Essence.

The recipe as given in the book is for potatoes cooked with melon seeds. However, not having any melon seeds, I used the suggested alternative of cashew nuts. I have also reduced the amount of oil used and skipped the initial frying of the potatoes. There are a couple of other minor tweaks, based on the ingredients I had to hand, but the essence of this wonderfully aromatic sauce remains.