The Sat Fat Challenge from the UK Food Standards Agency, for example, prompts the user to take different challenges which will reduce their saturated fat intake, some of which I can get behind and some of which – like the recommendation to use low fat milks and yoghurts – I can’t. That we have issues with over-eating and excesses of certain foods in our diet, I don’t deny, but I happen to be a big believer in sticking to full-fat-as-nature-intended when it comes to dairy products. And just because a yoghurt is labelled low-fat, doesn’t mean that it’s not laden with sugar.

That’s the thing, you see.

My real problem is with identifying one specific thing in isolation as the culprit of our dietary woes – yesterday salt, today saturated fats, tomorrow carbs and so on. Salt, fat, sugar – these are not the enemies per se, but highly processed foods – which can have excessive quantities of all of these – are. I’m not saying that we need to return to the privation of Handel’s day, but cutting down on highly processed foods, eating a goodly amount of whole foods and adopting an everything-in-moderation approach is more my style (Jamie Oliver’s style too it seems). Drip-feeding people with narrowly targeted applications (which themselves seem a little highly processed to me) seems like it manages to sidestep the broader question of what it takes to have a well-balanced and sane approach to eating and so, for me, falls some way short of the mark. 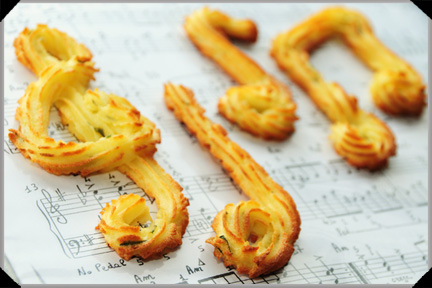 Well, after that little rant, here’s a bit of sat-fat-and-carbs action for you – with due acknowledgement to Handel for inspiration in the musical shapes department. Musical shaping aside, these are basically duchesse potatoes, made when an egg-enriched mash is piped into shapes and baked.

The classic formula – as described in the likes of Escoffier’s Le Guide Culinaire and Larousse Gastronomique – calls for butter, egg and egg yolks to be added to the mash, though you’ll see plenty of variants which add milk, cream and/or cheeses to the mix. Really, you can add whatever you like – I’ve used goat’s cheese and mint here – as long as you keep the mixture fairly stiff, which makes for firmer shapes that are that bit easier to pipe.