Can it really be a year since my first, momentous Potato Day experience? A whole year since I travelled the picturesque byways of Leitrim to the annual celebration of the noble tuber at the Organic Centre in Rossinver? Apparently, yes, it was time to pack my bags and head west again. 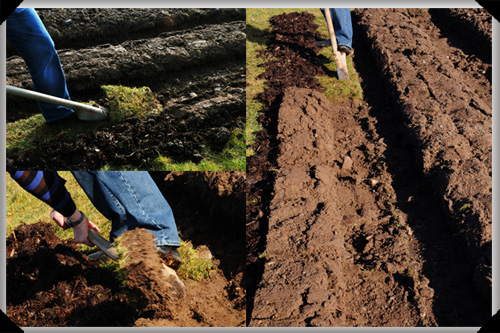 Old Irish Lazy Beds: potatoes planted on the ground and covered with sods sliced from either side

The event makes for a worthwhile excursion if you are of a mind to plant potatoes or are generally interested in the how of spuds. They had around 20 varieties of seed potato on sale, advice for gardeners on dealing with the curse that is potato blight, demonstrations of old-style lazy bed planting, a potato-heavy menu at their cafe and, of course, the irrepressible Dave Langford with his collection of heritage potatoes. 100+ of his varieties were on display, along with a new and absorbing addition… 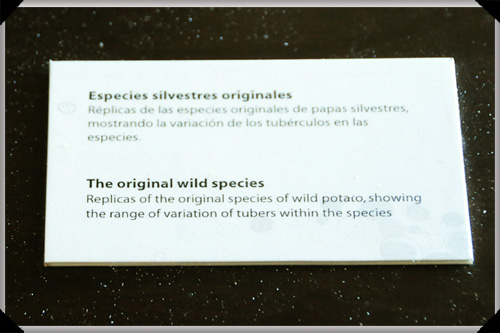 Above is the description accompanying a large display panel that Dave had sourced from the International Potato Centre in Peru. It sports replicas of the many fantastical shapes and colours of the original subspecies of wild potato from South America, all thousands of years old and most, if not all of which are still grown there. 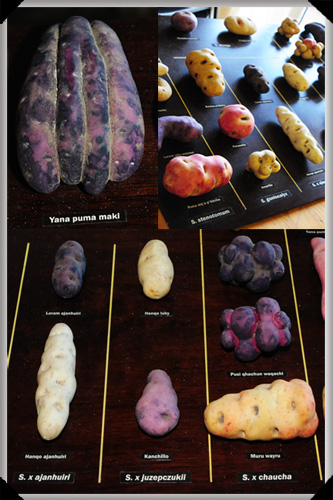 As we chatted, Dave gently tut-tutted my acquisition of seed potatoes from England (though he followed that up with an enthusiastic enquiry as to what I varieties I had scored). In his ever generous manner, he offered me my choice of seeds from his heritage collection. I came away with a precious cargo – one seed each of Champion, Bloomer, Flounder, Linzer Delikatess, Anya, Ambassadour, Bonnie Dundee, Étoile du Leon and (the one variety you might just recognise) Idaho.

I still mourn the loss of the seeds that Dave gave me last year, which fell victim to the slug barons, so I’m hoping for better luck with this lot. There is, however, a new and greater enemy to fear:

Not some sci fi flight of fancy but a blight so virulent and aggressive that it has resulted in some producers just pulling out of potato production altogether. First found in the UK around 2005, it has made its way to these shores and puts older forms of blight in the ha’penny place. Apart from the new sarpo potatoes, even varieties that normally show good blight resistance are succumbing to its deadly charms. Between that and the grim news that the European Commission has sanctioned the planting of GM potatoes across the continent, it was clear that the ancient spud is facing some very modern challenges.