There is at least one legend which holds that would-be assassins tried (but failed) to kill St. Patrick with poisoned cheese. There are a number of conclusions which we may draw from this, to wit:

– St. Patrick was fond of cheese.
– He knew a dodgy cheese when he tasted one.

Therefore, what better way to celebrate the feast day of our patron saint than to include a platter of Irish cheese as part of the Paddy’s Day Food Parade. And not just any cheese, but a selection of fine Irish raw milk cheeses, because I can guarantee, given that Louis Pasteur was far from born at the time, that St. Patrick’s cheese board would have been filled with nothing but cheeses made from raw milk. 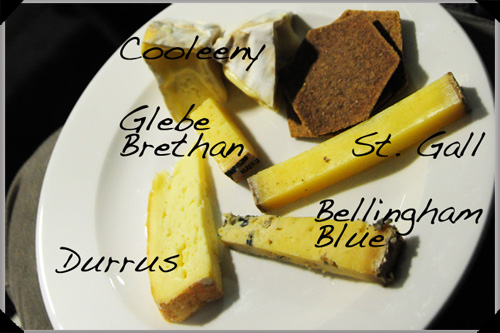 What you see above is the cheesy selection served at a recent Slow Food Ireland raw milk cheese tasting. It was a fascinating evening, presented by Kevin Sheridan of local cheese mecca, Sheridan’s Cheesemongers, and included expert guidance on smelling and savouring your cheese from Cristiano De Riccardis, an organoleptic taste expert with Slow Food Italy. Dr. Prannie Rhatigan, Slow Food Presidia Manager for Ireland, was on hand to explain the idea of presidia as a mechanism for nurturing, protecting and promoting traditionally produced foods. The raw milk cheese presidium is the only one active in Ireland at present.

So what is the deal with raw milk cheeses, anyway?

Not having been exposed to the heat treatment required for full pasteurisation, raw milk cheeses retain more of the natural flavours and nutrients present in the milk used to make them. Cristiano explained that raw cheeses, as a consequence, are generally more complex and have aromas that linger longer in the mouth. And yes, they are safe to eat (unless doctored by some assassin type). From what I can gather, a maker of raw milk cheese in this country can expect health and safety inspections aplenty, so have no worries about seeking these cheeses out: 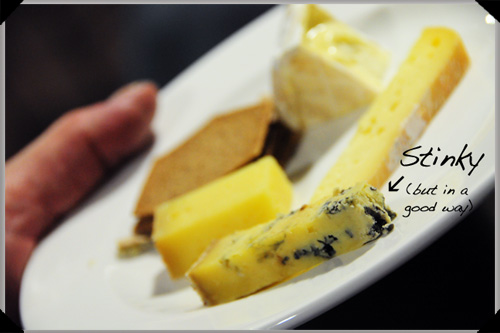 Looks unsuspecting, but that Bellingham Blue packs a punch 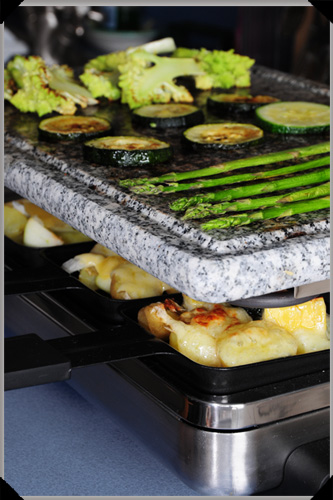 In fact, inspired by the saintly Swiss-cheesy connection, I thought it appropriate to use St. Gall, which melts beautifully, for some Paddy’s Day raclette (and, yes, I was looking for any and all excuses to use my newly acquired straight-from-Switzerland raclette grill set). Grill some green vegetables on the hot stone above, melt some killer Irish cheese on spuds under the grilling element below and away you go. 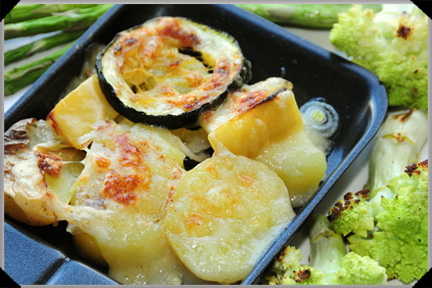 Raclette – which is really just an excuse to eat liberal amounts of melted cheese – might just be the perfect thing to serve if you’re entertaining guests. There’s minimal preparation involved, just chopping mostly, and the invitees cook their own food. You just need to keep them supplied with cheese, chopped vegetables and other grillable tidbits, and, of course, plenty of wine.

Small, waxy potatoes are a very standard part of any raclette-style meal – there’s even a variety of potato called raclette – though any waxy potatoes will do nicely. For a Paddy’s day twist, just supply plenty of green vegetables, along with an Irish cheese, and let everyone else do the work.

The amounts here are up to you, depending on how many you want to feed, what they like to eat and how many different types of vegetable etc. that you want to serve. As you can see, this is pretty free-form as recipes go.