We Have Ways Of Making You Eat

And make no mistake, they are out to feed me.

First, Milano’s invite me to come and taste their new Francesco Mazzei range. All of it. Two starters, a pasta dish and three pizzas. In one sitting.

Let me tell you that the word full doesn’t remotely cover it. 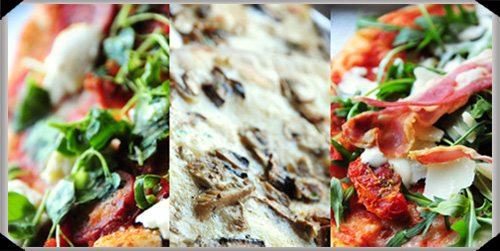 Milano's Francesco Mazzei Pizzas:
Calabrese (sweet, chili-hot and sausagey, the crowd favourite), Mia Sofia (a thin-based pizza blanca that is all about the mushrooms) and Rustichella (which, let's face it, people will love for the pancetta)

Then, when I had finished digesting that, they sent their guys around with dough balls and pizza from the new Milano At Home range (eh, don’t mind if I do, grazie mille). Perhaps they’re out to change my spudly ways (after all, with the noble exception of gnocchi, Italians don’t seem to go in much for the whole potatoes thing). Or maybe they wondered if I had opinions to share, which, when it comes to food, I generally do.

Let me start by saying that the dishes by Francesco Mazzei – chef proprietor of L’Anima in London – seemed to me to be about simplicity and quality of ingredients. It was good to see that his choice of lovely Calabrian olive oil and oregano are now being used, not just with his own dishes, but throughout the Milano’s range. The corollary, of course, is that, without good quality ingredients, Francesco’s dishes do not have a whole lot to hide behind.

And that was the one niggle in an otherwise enjoyable meal. 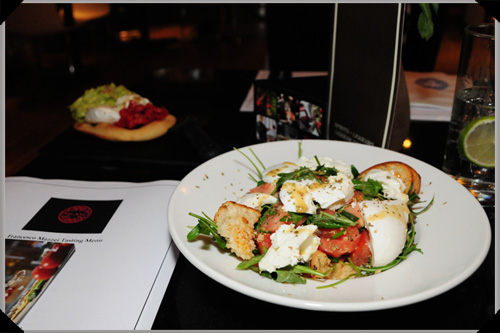 The Insalata Semplice – a classic tomato and mozzarella salad – was, for me, let down by a lack of flavour in some of the tomatoes used. Now, it’s fair to say that we in Ireland are no strangers to poor quality tomatoes – goodness knows, those sold in supermarkets here don’t often taste of anything – but neither should we be too surprised that tomatoes lack flavour when they are not anywhere near being in season here. In fact, I expect that it is difficult, or at least expensive, to source large quantities of really good quality, flavoursome tomatoes here at this time of year.

The real question is, why bother?

Do we really want to eat fresh tomato salad (a) when the season dictates that tomatoes are unlikely to be anywhere near their best and (b) when it’s still freezing outside ? (yes, winter is proving very hard to shake this year)

The word seasonality has been bandied about much of late, but how many of us still expect to be able to order a fresh tomato salad year-round and would be perturbed if we couldn’t?

And before you ask, I will own up to the fact that I am as guilty as anyone of buying, and expecting to be able to buy, fresh tomatoes year-round. And there is (I am sure) a lot of effort involved in devising seasonally sensitive menus, particularly when you are trying to roll them out across a restaurant chain like Milano’s.

It goes to show, I suppose, that we have a long way to go when it comes to this whole eating seasonally and locally lark. I’ll shut up now before someone reminds me gently to just, er, fuhgeddaboudit… 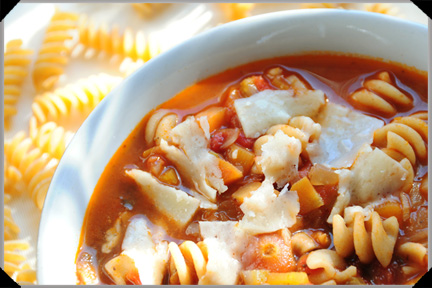 Given the continued low temperatures outside, I am inclined much more towards soup than salad these days, and minestrone is Italian for just the kind of hearty soup I fancy in this weather.

Minestrone is also all about what you have to hand, so adjust to suit your own stash of vegetables. This version has got the the olive oil, mushroom and oregano that featured strongly in the Francesco Mazzei Milano’s menu. It’s also tomatoey, but thanks to good quality tinned tomatoes, which are a better choice at this time of year.

As for the pasta, use whatever dried pasta you have to hand, breaking larger pieces up into whatever size pieces you’d like to find in your soup.