The instructions for today’s Spud Sunday can be neatly summarised as follows:

The contents in question consist mostly of cooked, grated potatoes. The golden-hued result is Swiss rösti. But from a packet? I should explain… 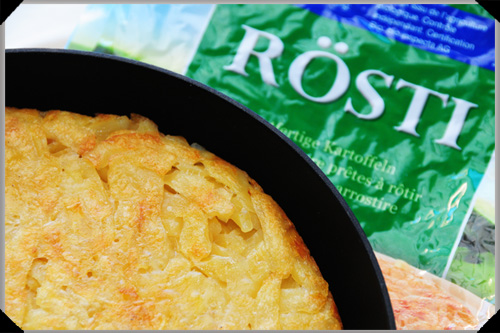 Let me first say that I detect a clear fondness for rösti among the potato-lovers of this world. At its simplest, this traditional Swiss breakfast dish is a pure combination of potatoes, fat and frying, which has, frankly, always proved to be a winning formula.

It is a testament to its popularity, in fact, that I have had several requests over the lifetime of this blog to feature rösti. People have sent me recipes for rösti. I have discussed the topic of rösti-in-a-packet with Swiss residents of my acquaintance, including my friend CJ, who explained to me that, for many Swiss people, rösti is something that comes in a packet. I was, naturally, curious to give it a try.

Last weekend, when CJ and her husband visited, they came bearing gifts from Switzerland. I was the fabulously lucky recipient of a wonderful raclette grill but I think that I may actually have been more excited about the packet of rösti that, knowing my potato fetish, they had also brought.

So today, I emptied the contents of the well-travelled packet onto my pan and, 15 minutes later, was dining on what is I feel certain was a pretty authentic Swiss meal. Not much more to it than spuds, vegetable oil and some unspecified vegetable flavourings but pretty tasty all the same.

Needless to remark, now that I know what the packet version tastes like, it’s time to move onto homemade rösti à la Spud. You should expect to see same appearing on these pages in due course.