When you get an invitation that has lunch at Eden Restaurant as part of the deal, you say yes and then ask questions later.

So it was that I found myself stuffing my gob at Eden during the launch by the Temple Bar Cultural Trust of their well-packed 2010 programme of events (which, I am delighted to report, includes the return of the Chocolate Festival, this time making a pre-Christmas appearance in December). 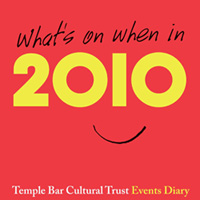 However, before the gob-stuffing got underway, I wondered did my fellow lunchers notice quite how much time I had spent staring at the menu? Or if they had caught the slight trepidation in my voice as I ordered the smokies?

Smokies, you see, are a permanent and much-loved part of the menu at Eden. A starter of smoked haddock in a sauce of crème fraîche, with cherry tomatoes, spring onions and melted red cheddar.

Smoked haddock, however, has not passed my lips since childhood.

During my youth, my mother’s smoked-haddock-in-some-kind-of-white-sauce was the most singularly reviled dish of my acquaintance. A fish-on-fridays staple, it was the cause of countless you-will-not-leave-the-table-til-you-finish-your-dinner standoffs.

However, as I looked at the Eden menu, I realised that it was time, at last, to give smoked haddock a second chance.

And so the smokies were ordered and the smokies were eaten, happily. I even went out and bought some smoked haddock the very next day, figuring that we had a lot of catching up to do. And where else to begin, but with some spuds. 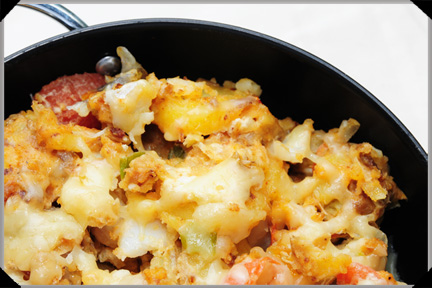 This is what happens when you take some leftover boiled spuds and fry them up with the ingredients that Eden use to make their legendary smokies.

As for the melted cheese on top, it may be anathema to some who think that fish and cheese should not meet on the same plate, but it works for the original smokies and I think it works here too.