Today, please allow me to present the egg-in-a-spud-shell.

I do not know:

No matter, really. Better to come late to the egg-and-potato party than not at all. 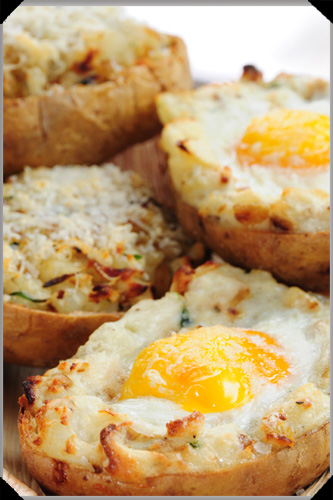 The idea is just a simple variation on twice-baked potatoes – bake your spud, scoop it out and use as an edible container for baking an egg. That’s it, really, though there are some more detailed instructions below if you need ’em.

And if the egg and potatoes thing isn’t doing it for you today, you could do worse that head on over to Sippity Sup’s place. Greg has just finished doing a full week of meat ‘n’ potatoes, including some braised short ribs with neeps-and-tattie cakes which may just have been inspired by the recent mention of neeps and tatties in this here jurisdiction. Sure I can practically claim it as my own.

So the slightly more detailed instructions for this go as follows:

Bake your spud, split it in two, mix the innards with some fried onions (and/or whatever else you’d like to see in a stuffed potato), then use a spoon or two of stuffing to line one half shell before cracking an egg into it. Pile the rest of the stuffing into the other half shell. Bake the lot, then eat.

There’s not too much else to say, except to use large potatoes if possible, as your egg may overrun the confines of a smaller spud and you may need to hold back some of the egg white in that case.

For flavouring, I used fresh tarragon – not something I usually have to hand but it made for a nice change from what would have been my more usual choice of thyme. You can go with whatever herbs you prefer.