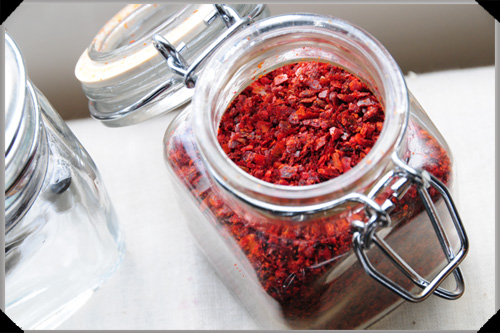 Give him a chance, though. Mr. Aleppo Pepper is worthy of your attention.

He arrived at my doorstep nestled amongst a host of goodies sent to me by Oz from Kitchen Butterfly (who is equally worthy of your attention, btw). Mine was the lucky number drawn in Oz’s first giveaway, so I received a beautiful basket filled with a veritable treasure trove of kitchen props. 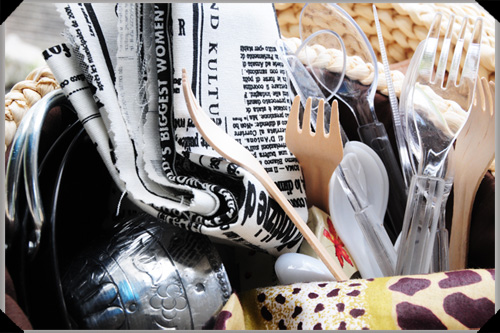 Just some of what the Kitchen Butterfly sent

There were spices too, among them the aforementioned aleppo pepper. Dark red chili flakes, fragrant, slightly smoky and, yes, with an aroma reminiscent of fruity tobacco. Oz had used some in her muhammara (and I’ll put some in mine next time too) but mostly I was thinking, hello Mr. Pepper, you’d be right at home with some spuds.

I was immediately filled with visions of potato chunks, roasted with oil and a generous helping of aleppo pepper, or perhaps a bowl of potato salad scattered with some of those fruity chili flakes. What with Pancake Tuesday just around the corner, though, my first date with Mr. Aleppo Pepper was, instead, deliciously crêpe-like. And it definitely had the taste of more Valentines to come. 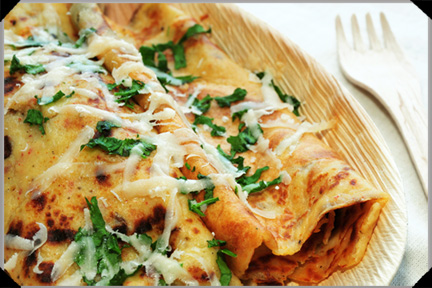 The batter here contains both sour cream and mashed potato over and above what you might expect to find in a basic pancake batter. Plus aleppo pepper, of course, as well as some oregano and cumin (a good buddy of aleppo pepper and firmly on the the A-list of spud spices).

You can eat these on their own, though they’re even better with some grated cheese melted on top – some parmesan or a sharp cheddar, say. You could also have them as an accompaniment to a bowl of chili or – here’s a thought – use them to wrap your favourite enchilada filling instead of the usual corn tortillas. That, I think, might be rather good.