That’s The Way I Breakfast Roll

I’m not expecting anyone or anything but, lo and behold, there is a man at my door bearing gifts (woohoo, I’m all for that!) – a basket of Denny sausages, rashers, ham and 2 still-warm, foil-wrapped breakfast rolls to be precise.

…or at least it would have been if I was given to eating porky products. As it is, I haven’t done so for a long time and, when baskets of same come my way (this being precisely the first time this has happened), I swiftly pass them on to family members who are only too happy to accept.

I suppose Denny weren’t to know. They were just drawing attention to the results of their “Home Is” campaign, where they surveyed people on their thoughts about what makes a home and, as part of the deal, donated funds to The Simon Communities of Ireland, longtime champions of the homeless in this country. Good on them for that.

The delivery got me thinking, not so much about home, though, as about breakfast rolls. 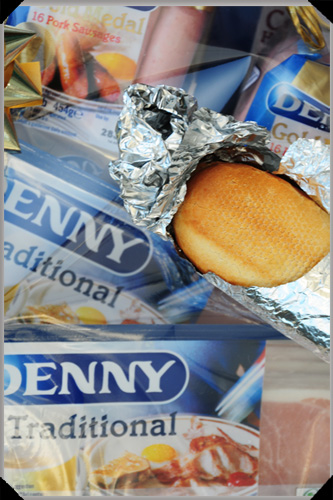 Beneath that foil exterior lurks a breakfast roll

For those of you not familiar with this classic item of Irish cuisine, just imagine yourself with a hangover and picture a white bread roll filled, more or less, with the contents of a full Irish breakfast: sausages and rashers at a minimum, sometimes black pudding, sometimes white pudding, sometimes egg, sometimes mushrooms and sometimes hash browns, plus ketchup or brown sauce. Best washed down with a big mug of tea.

They are a staple at hot food counters in garages and supermarkets the length and breadth of the country and are the stereotypical early-in-the-day meal of choice for Irish construction workers (even to the point of economist David McWilliams coining the phrase “Breakfast Roll Man” to describe a representative of that now much rarer construction worker species).

Breakfast rolls have even been immortalised in song:

Far from the healthiest things in the world, they are precisely the kind of thing you might want if you were feeling a little the worse for wear in the a.m. And while I might not be given to partaking in the classic breakfast roll these days, that’s not to say that there aren’t times when I fancy something breakfast-roll-like. When that happens, I might just make something like this: 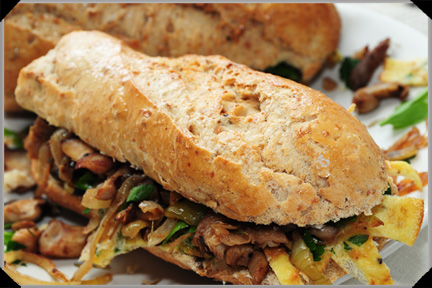 The recipe for a breakfast roll may be summarised as follows: “Stuff whatever fried objects you’d like for breakfast into a crusty bread roll”. In this case, the fried objects are pieces of shredded omelette and a mushroom, garlic and onion mix. For more detailed instructions, should you need them, see below.