Let me explain to you how this works:

(a) Big food brand gets together with well-known chef.

(c) Brand wants to demonstrate general tastiness of the recipes, so they get the chef to make lunch using some of same.

(d) Third parties get invited to said lunch to provide independent verification of the mouth-watering nature of the chef’s creations.

(e) Lunch is eaten, wine is drunk, everybody goes home happy, well-fed and well disposed towards the parties and the food involved.

Simple enough formula, really, and I got to see it in action up close this week, where the brand in question was Philadelphia cream cheese, the chef was Kevin Dundon (yes, he of the Zest! interview experience) and I was one of those well-fed third parties. 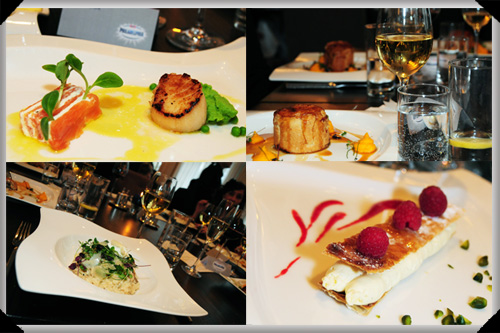 I will admit that it is sometimes still, if not a mystery, then at least a source of wide-eyed wonderment to me that I get to be the kind of third party who receives such supremely edible invitations. I’m not complaining though, except possibly (and only very slightly) from the extreme fullness of belly that my attendance involves.

And whatever opinions I might have had about such brand endorsements, I was won over on the day, not just by the food (which, unsurprisingly, was lovely) but by Kevin Dundon who (a) remembered me from the Zest! launch (b) did not give the impression that I had conducted what was possibly the worst interview ever last time out (c) was utterly patient and charming and (d) clued me into the secret of his stunning turnip purée.

The purée, which accompanied the main course, was probably the only thing on the menu which did not involve a liberal helping of Philadelphia. What it did contain, though, was potato, making a play, in this case, for best performance by a vegetable in a supporting role. The potato was present in sufficient quantity to tone down the sweetness of the turnip and give the dish more body, without it being obvious that it was there at all. It made for a killer combination and proved, yet again, that the Scots are really on to something with their penchant for combining turnip and potato as neeps and tatties.

And finally, I would like to think that the otherwise notable absence of potato from Kevin’s cream cheesy lunch menu was not an oversight, but rather, an invitation to rectify the situation. I am more than happy to do that right here and right now with some cream cheese mash. 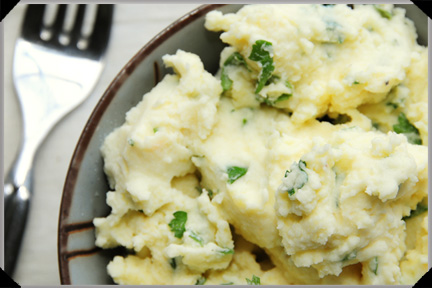 Cream cheese is, of course, endlessly versatile as an ingredient and, like many of its dairy product cousins, it is extremely happy in the company of potatoes. You can easily conceive of it layered into a gratin, mixed into a mash, gracing a baked potato or dressing a potato salad.

Here it finds its way into a simple mash with some mustard, parsley and spring onions. This can, of course, be eaten warm, though I think it’s possibly even better served salad-like at room temperature, perhaps with some smoked salmon and brown bread or toast.

I did use Philadelphia as the cream cheese here (the makers had kindly supplied me with some), though you can, of course, use whatever cream cheese you prefer. I’m certainly keen to try this with some Yeat’s Country Irish cream cheese as soon as I get hold of some.

For those interested in the theories behind what makes a good mash, you can take a little detour here, just remember to come back this way when you’re done.